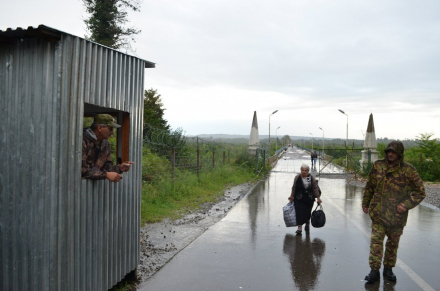 GALI, DFWatch–None of the political parties in Georgia’s presidential election campaigned in the conflict zone, according to locals DFWatch spoke to in Gali, the southern district of breakaway Abkhazia.

This is unlike previous elections, when the ruling party had local campaign workers out among the population promising various benefits, a resident of the  village Tagiloni said.

“Minibuses were amassed at the ‘border’. We were taken by these minivans and brought back,” she recalls, adding that nothing similar happened this year.

Another local said he travelled from Gali to Zugdidi across the administrative borderline to cast his vote but didn’t notice anything out of the ordinary.

“Previously, [breakaway authorities] used to restrict crossing ‘the border’, but this time everything was exactly the same as on other days. I traveled with the usual passenger minivan, and there was no additional transport,” he said.

However, another local, who also travelled to Zugdidi in order to vote, told DFWatch that they encountered several campaigners during the trip.

“There was not the usual election fuss here. I don’t know what the reason is. Maybe they just neglected us,” he said. “The political environment was generally stagnant, yet I encountered a couple of Georgian Dream campaigners en route to Zugdidi in the van.”

The locals DFWatch spoke to also noted that Salome Zourabichvili did not have much support in the Gali territory.

“Generally, Gali residents have always supported the previous government, but now it has been influenced by the fact that [Georgian Dream] candidate is distinguished with pro-Russian statements, which is unacceptable for us,” said another resident of the district.