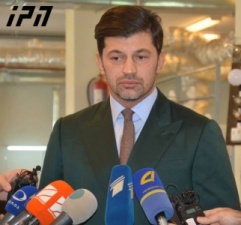 TBILISI, DFWatch–Georgian Dream — Democratic Georgia, a key political party within the Georgian Dream coalition, may opt for running independently in the upcoming parliamentary elections, Kakha Kaladze, Minister of Energy stated Saturday, thus adding fuel to the fire in the widespread speculations about a possible dissolution of the ruling coalition.

Until recently, major politicians with the GD vehemently denied any notion of the coalition’s dissolution, however, during the last several months some of them have publicly acknowledged such a possibility.

“Since 2012 I’ve been saying that the [Georgian Dream] coalition will fall apart one day. It is a normal process, not some sort of a tragedy. I think that it is a step forward towards democracy. It wouldn’t be bad if all [coalition member] parties took part in the elections independently and later decided in the parliament whether they’d like to be in a coalition together. This is my personal opinion, although we will bring it up with the prime minister at a coalition meeting,” Mr Kaladze said at a gathering of the Georgian Dream party in Rustavi on Saturday, Interpressnews reported.

Georgian Dream — Democratic Georgia is a political party which was founded by billionaire Bidzina Ivanishvili in 2012. It is the dominant party of the ruling Georgian Dream coalition, which also consists of four other smaller parties and independent politicians. Irakli Alasania’s Our Georgia — Free Democrats left the coalition in November 2014.