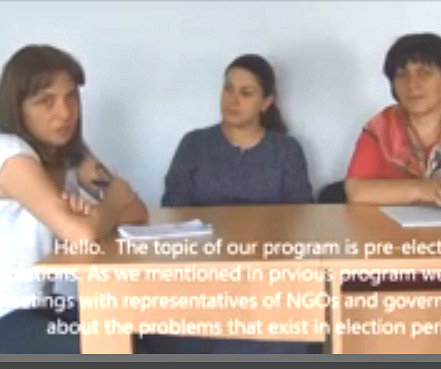 TBILISI, DFWatch–DF Watch organized another round table discussion on September 18 about election.

It was attended by the representatives of two local non-governmental organizations, and the purpose was to discuss problems in the election period and what steps have been taken after last year’s parliamentary election.

Participants were Irina Putkaradze (right), who is head of the Public Defender organization and Keti Chachava, (second from right), head of the Development and Democracy Center organization. Both of them are members of the inter-faction group which is working on election issues, including amendments of the the Election Code.

The guests remarked that the election process this year is much better than it was last year during Saakashvili’s government. Despite this, they highlighter several problems in this year’s campaign.

Irina Putkaradze said one of the major problems is the voters’ list.

A decision was made so that the list must be formed on the basis of biometric data, but this method will only be used for the next local election, which will take place in May 2014. The presidential election will be conducted on the basis of a list which was prepared for last year’s parliamentary election.

But last year, 90 000 voters were removed from registration, because they weren’t found on their registered address, but this year decision was made so that these people can participate in the election, if they will register on their new address. Still, the NGOs fear that it will be hard to inform people of their right to vote.

During the discussion, the guests spoke about the risk that administrative resources will be used in favor of the ruling coalition in certain cases. They also remarked that during the election reform before the presidential election, there were important concerns that were not adequately solved in regards to the election system and the rules for staffing the election administration.

Irina Putkaradze and Keti Chachua think that the Election Code needs to be completely overhauled, because numerous regulations create an opportunity for manipulation.