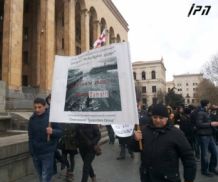 A gigantic planned hydro power station has brought environmentalists out in the streets in Georgia. (Interpressnews.)

TBILISI, DFWatch–Non-governmental organizations (NGOs) in Georgia ask the government for answers about the construction of Khudoni hydro power station. There are many questions regarding environmental and social issues.

Friedrich Ebert Stiftung and an initiative group of NGOs Friday organized a conference about the challenges posed by the Khudoni project. The goal of the conference was to learn about the position of the government and society regarding the construction and facilitate a dialogue between them.

But only the minister of environment and the chairman of parliament’s environment protection committee attended the conference from the government, which was met with dissatisfaction from the other participants at the conference. They had questions they wanted to ask the economy and energy ministries, but the ministers didn’t come and neither did they send anyone to represent them there.

Khudohesi is a planned hydro power development in Svaneti, a mountainous region in the north west of Georgia. It was decided to construct Khudoni in the 1980s when Georgia was a part of the Soviet Union. Construction started on the River Enguri in 1986, but was suspended due to ecological concerns in the end of the 1980s and construction remained stalled after the Soviet Union collapsed.

In 2011, a study was conducted by order of the government and with support from the World Bank, which recommended construction of Namakhvani, Paravani and Khudoni as the most attractive options for development of the energy sector in Georgia, but environmental activists were skeptical about the construction of Khudoni.

When there was a change of government and Bidzina Ivanishvili’s Georgian Dream coalition came to power, the construction process was suspended again due to a promise they had made to conduct new study of the consequences, since part of the population and NGOs were categorically against the construction.

The National Movement criticized Ivanishvili’s government for suspending the construction work and claimed that the government was killing the potential for the country’s development. In September the issue once again came to the fore as talks started to resume construction work.

According to the latest project plans there will be constructed a 702 MW hydroelectric power station which will cost about USD 776 million. The construction work must finish in 73 months and the author of the project is Trans Elektrika Limited.

The project has many opponents among the local population, who are threatened with resettlement, and among environmental organizations, who claim that the project has not been properly studied and the risks and damages are not well assessed, further, that it is not known what danger the construction of Khudoni will pose.

NGOs which took part in the conference agreed on a common statement which says that they are concerned about the government’s decision to construct the Khudoni high arch dam, because there has not been conducted any study of the project and engineering design activities or geological study of the restored and renewed project.

They also claim that no-one has studied what changes there have been in the base of the dam for the last 40 years and what influence earthquakes have had in the area for all this time when the territory wasn’t even preserved.

The NGOs believe that the documentation suggested by the authors of the project do not allow for making estimates and compare the possible economic growth the project might bring to the potential social, demographic, ecological and cultural damage which may be caused by it.

The statement also says that there is no proper plan of resettling the local population, when the project requires displacing more than 3 000 people.

“This may have a devastating impact on the small ethnic group of Svanetian people,” the statement continues, adding that the social and natural environment in Svaneti is in danger.

In a long term perspective, implementing the project will cause increasing geopolitical and military risks for the country, the NGOs claim.

They recommend that the government assigns experts to study all the risks and problems they point out and then makes a decision, after the experts have made their conclusions public.