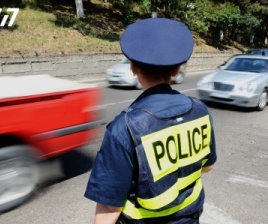 TBILISI, DFWatch–Over a year after a wave of complaints about frequent police searches in the streets, new reports are coming in of the same problem.

People are being stopped and searched by the police in the streets.  During one such raid, a reporter for media.ge was stopped. This happened while she was trying to film one of the police ‘raids’, as they’re called, with a video camera, but the police took her camera and deleted the recording.

The police also detained another person who was with her and filming the process with a camera phone. The latter was soon released, as there had taken place no criminal offense.

September 5, people began telling stories of being stopped and searched by the police. Police have a right to conduct surface searches as a preventive measure, and if there is reasonable doubt that a person may be carrying a weapon or there is some other danger.

Deputy Interior Minister Levan Izoria said on Monday that the results of the so-called ‘raids’ are pretty good and people have a positive perception of them. Speaking at a press conference, he said that police is carrying out searches in accordance with law.

He said, this is not raids like during the Soviet era, but completely new ‘special police control’ which complies with European standards.

He added that information about ‘special police control’ will be reported later when the statistical data have been colated. It is unknown how long this will last. Izoria said that often when people complain about police searches they don’t know that the police actually has a right to search them.

The press office of the Interior Ministry told DF Watch that these are not ‘raids’ but ‘special police control’, just like the deputy minister explained, and they are carried out due to a demand from the public, and are only fo preventive purposes.

The Interior Ministry claims that the crime level in the country is stable and there is no reason for concern.

“However, no matter how stable situation there in the country, people demand to improve it. We got this order from society and carry it out while in accordance with the law,” Izoria said.

During August-September, there was an increase in reports of crime. This caused concern among people, and became ammunition for the National Movement, which regularly criticizes the government for letting crime develop. Many distrusted the statistics presented by the Interior Ministry which showed that the number of crimes has been significantly reduced compared to last year.

In August, 2013, people were reporting about frequent police searches in the streets.

At the time, the Interior Ministry also claimed that it was for preventive measures. During days of police searches, the ministry reported that the police confiscated tens of illegal weapons.

On Monday, there were further complaints from people who said the police had fined them for drinking alcohol in the streets or some were even detained for resisting the police.

Irakli Sesiashvili, head of the Defense and Security Committee in parliament, told journalists that considering the recent frequent crime reports, police searches were necessary to ensure the security of citizens.

“I understand that there can be some misconceptions, but this is also some kind of lesson that if there is an error, we must improve it. The important thing is that we provide security for our country and citizens.”

As happened last year, the sudden emergence of frequent police searches remind many Georgians of the Shevardnadze era, when searches by police were common and dispised by people.