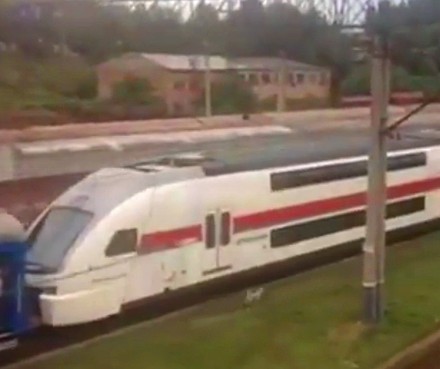 TBILISI, DFWatch–Two Swiss-made bilevel trains have arrived in Georgia and will be servicing the Tbilisi-Batumi line starting later this month.

The bilevel train cars are manufactured by Stadler and arrived in Tbilisi yesterday. A spokesperson for Georgian Railway told DFWatch that two trains have arrived and they will serve passengers from the end of July.

A video uploaded to the Internet shows the moment when the trains arrived in Tbilisi on July 6, which seems to indicate that each train consists of four cars. Previously, photos of the train were uploaded to the Georgian Railway Facebook page.

Last month, Givi Kublashvili from the organization New Georgia claimed that the new Swiss trains would be too big to safely pass tunnels in Georgia. But both Georgian Railway and Stadler denied that there had been problems with the dimensions of the rail cars. They underlined that Swiss experts were in Georgia before the train wagons were manufactured. They studied the infrastructure, tunnels, platforms and track systems and they are adamant that the new trains are compatible with the system in Georgia.

The new trains will take passengers from Tbilisi to Ureki-Kobuleti-Batumi and back.

Dachi Tsaguria, spokesperson for Georgian Railway, told us that the ticket price will be the same as in the past.

He said that the company has purchased four trains from Stadler, to a cost of EUR 40 million in total, and the two more trains will be delivered in Georgia in the beginning of 2017.