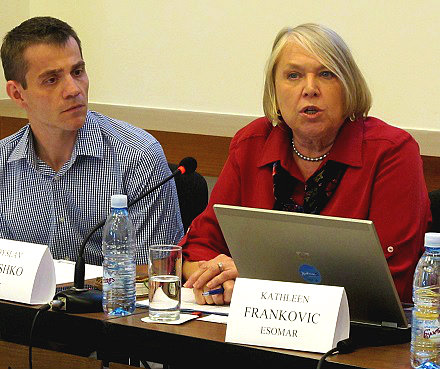 Kathy Frankovic, one of the co-authors of the report. (DF Watch photo.)

TBILISI, DFWatch–A new report about the political polls in 2012 warns of a dangerous trend if last year’s polls continue this year ahead of the presidential election in October.

The report Making Public Polling Matter found that the results of last year’s polls showed results that were that differed both from each other and from the final results of parliamentary election.

One of the key findings of the survey is that while respondent unwillingness and fear to participate and concerns about privacy are not unique to Georgia, they were frequently expressed in interviews with the expert panel; poll companies should review their methodologies because the interviewing context can impact results.

According to the survey, which also monitored reports of media on polling, media coverage was focused ‘exclusively or narrowly on the voting percentages, with the polls seen as part of political public relations, instead of being used to help explain the public’s choices.’

Among the major issues is the prison abuse scandal, which emerged two weeks before the election. Footage of torture and mistreatment in Georgian prisons was released in the media and affected the results of the election.

“While there is only limited public polling information, private polls confirm the scandal’s impact,” the report reads. “It is impossible to judge the accuracy of surveys conducted in the summer of 2012, before the scandal emerged, against the election returns.”

Kathy Frankovic, one of the co-authors of the report, said during the presentation at Radisson Blu Iveria on Wednesday that the major organizations didn’t conduct surveys in the days after the prison abuse scandal and before the election.

In that period, just two weeks, it was hard for them to plan and implement a new survey, as told by representatives of the organizations, but still there were just a few polls done after the scandal, which showed drastic change in the poll results.

Frankovic presented the results of a poll done by Forsa and conducted by the Young Psychologists Association.

“When compared with the election results, the final Forsa poll clearly over-estimated the lead for Georgian Dream.”

The authors of the report said during the presentation the major goal was to study polls related to the election of October 2012 and to study the methodology, how correctly surveys were conducted, what were the questionnaires and how the interviews were done, as ‘research means much more than just a statistical data.’

And the goal of the report is to make recommendations and improve methodology of the organizations doing polls for the next president election.

The results finally differ from the actual results from the election, when the United National Movement received about 40 percent and the Georgian Dream coalition about 55 percent of the votes.

Frankovic said that it is hard to define the results, where so many people say they haven’t made up their mind yet or refuse to answer; however bringing results from one additional polling she gave an example that by asking additional questions to those who answered ‘don’t know’ it is possible to gage their political position.

The authors of the report recommended organizations doing surveys to avoid face-to-face interviews, which in their opinion influences those questioned, and this practice is already thought to be old, as many countries now use phone interviews for their methodology.

They also suggested creating a public archive of all polls done in the country so that everyone could use the data if needed.

This idea got support from the guests attending the presentation on Wednesday.

The report was commissioned by the Open Society Georgia Foundation and Open Society Think Tank Fund in partnership with researcher associations ESOMAR and WAPOR.