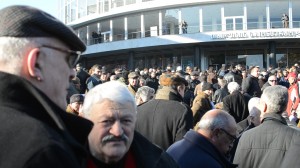 TBILISI, DFWatch – Over a thousand people enjoyed a sunny Tbilisi today outside the old Philharmonic, where a new opposition movement is being launched at 3 pm by the businessman Bidzina Ivanishvili.

Interpressnews reports that many well-known faces have been spotted in the masses of people registering to be let into the hall.

Among them are the Ukrainian football player Andriy Shevchenko, who was invited by his Georgian colleague, Kakha Kaladze, who is also investor and has kept a high public profile for years.

Many non-governmental organizations and political parties are also showing up in large numbers today, including the “Free Democrats” and the “Republicans”, the two political parties with which Ivinashvili has formal relations.

The event opened with a performance by Ivanishvili’s rapper son, Bera. Later Bidzina Ivanishvili himself took the stage and made an addresss, in which he opened by saying that the first aim is a free and fair election environment, to ensure that the most popular party gets elected.

He went on saying that the Georgian people have grown disillusioned by what has gone wrong in the country since the rose revolution in 2003.

In Ivanishvili’s description there is a combination of injustice and an unsound economic monopolization that is the main problem. The lack of independence in the courts, the politicization of law enforcement, the situation in the prisons, on the one hand, and on the other, the lack of a middle class as a driver of development.

He mentioned the internally displaced, whose temporary housing is insufficient, and said that there is not enough attention paid to the other nationalities living in Georgia. While talking about the education system he offered a few compliments to the reforms and the new national exams.

The media must be freed from government control, he further said, and the movement’s aim is to build a state based on honesty, dignity and professionalism.

Several women were seen shedding tears during the speech.

There was also announced a sister event at another concert hall, where people could watch the main event via a big screen, since organizers knew the Philharmonic would be too small. The public TV’s  “Second Channel”, which the government of Georgia has declared provides “live and unedited coverage of all political events”, did not broadcast live from the event, as usual. Maestro, on the other hand, did.

This is the independent cable channel which taken off air on November 30 with the aid of police, the morning after Ivanishvili appeared live from their studios, his first studio appearance. Later a judge made a ruling which will lead to the TV being taken over through legal means within a year’s time. Meanwhile the journalists are continuing their broadcast in emergency mode from an alternate location.