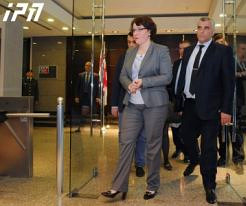 TBILISI, DFWatch–Three new ministers Monday started working, even though they haven’t been approved by parliament yet. Constitutional experts say it is unlikely that they have a right to function as ministers.

The three new appointees arrived at their respective ministries Monday, where their predecessors hosted them and held a formal transfer of duties. In a break with previous appointments in Georgia, the prime minister did not introduce any of them before they started working.

Khidasheli was an unexpected nominee for defense minister, because earlier, the PM claimed that only ministers who recently resigned, would be replaced: the environment and sports ministers. A week before that, the minister of infrastructure resigned and his replacement was soon found.

If a third of the government is replaced, parliament has to declare confidence in the new government. Since there are 19 members in the cabinet, plus the PM, the seventh ministerial replacement is the tipping point for when a government must be dissolved. At this point, a new government is formed and approved by the parliament.

Friday morning, the acting prime minister named candidates for the new government and among the replaced ministers were the new defense minister. Garibashvili did not explain the reason for replacing Mindia Janelidze, who served on this post only a few months and was often criticized.

The PM named the candidates and asked parliament and president to accelerate the process to approve the new government. The president, however, did not accommodate, but chose to postpone the process for a week, explaining that everything was unexpected, as he learned about the replacement of the defense minister very late. He didn’t sign the list of candidates and took a week to ‘think more’.