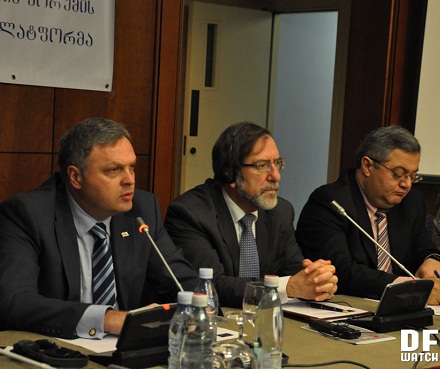 TBILISI, DFWatch — The new governing coalition will have as goal to establish a real multiparty system in Georgia, Georgian Dream candidate for Parliament Speaker promises.

Davit Usupashvili says it should not be surprising that in the new parliament their coalition might be represented by a number of factions.

Georgia’s National Platform, which is the largest union of local non-governmental organizations (NGOs) with support from the EU on Monday held a conference regarding political processes and perspectives after the parliamentary elections.

Present were representatives of the National Movement party, the Georgian Dream coalition, NGOs and foreign diplomats, and the conference aimed at engaging the parties in a discussion.

Usupashvili, the Republican Party leader and candidate for Parliament Speaker, spoke about the challenges facing the new ruling party in the process of transferring power and afterward.

One of the main problems he focused on is that for years Georgia has been managed by a single party.

“Let me remind you of the year 2004, when Mikheil Saakashvili called for everyone to abolish their parties and join his own party. Many really did join him, including Zurab Zhvania [former Prime Minister], but we Republicans refused,” he said, and added that step by step, power was concentrated in only one party.

One of the main challenges for the election winner Georgian Dream will be to establish a multiparty system.

Usupashvili says now both parties are having difficulties: Georgian Dream will have to carry a ‘cloak of moral inquisitor.’

“There was injustice, many crimes were committed, much property was stolen, but we shouldn’t be tempted by revenge,” he said, adding that older crimes should become subject for review by the courts.

On the other hand the National Movement should suit a ‘cloak of tortured democrats.’

“Admitting defeat doesn’t mean that everything is already in the past.”

The future Parliament Speaker thinks that the recent election was not a competition between parties, but between the people and the ruling party.

“People had to win over the government,” he says, and explains that the country should go on and create real political competition.

Usupashvili says it is not right having politicians without political experience, but Georgian Dream had no other way. Well-known public figures like artists, writers, and sportsmen joined Georgian Dream shortly after Bidzina Ivanishvili appeared in the political arena. Many of them where nominated as majoritarian candidates and others in different official positions. The explanation is that those people do not have a dirty political background and will do their best to develop the country in their fields of expertise.

Davit Usupashivli responded to frequent evaluation of recent election that it was a test of Georgian Democracy passed with success, but he says it is not enough.

“Of course we will use it while knocking on doors of NATO and EU, but it doesn’t ends there. We haven’t passed the test yet,” he says, yet the country is far from real international standards and it is a difficult period right now.

Giorgi Baramidze, who used to be State Minister for EU and Euro Atlantic Integration and majoritarian candidate for the National Movement, said the election campaign had been tense, rough, difficult, unpleasant and full of accusations and physical confrontations.

“But I’m still proud of what happened in Georgia that we proved that we were saying what we really meant – we step by step where moving towards democracy,” Baramidze said. “It was not ideal, but we should try and keep moving forwards.”

He said the government did everything in order to have democratic election, including inviting numerous international observers, cooperating with the opposition, part of which really wished to cooperate, and amending the election legislation.

“The election was unsuccessful for us, but Georgian society won.”

Baramidze reminded about President Saakashvili’s statement on October 2, a day after the election, when no official results where known, but he still admitted defeat of his own political force and stated that his party was moving into opposition.

He criticized Georgian Dream leader Bidzina Ivanishvili for his speech in the yard of the president’s residence, when leaders of two political forces held their first meeting.

The National Movement representative said they won’t prevent their opponents from implementing their goals despite being skeptical about what the new government will do for the country. He said they won’t use the authority granted by Georgian legislation and won’t create a political crisis.

Responding to this, Usupashvili said that he is not naïve and doesn’t believe the president is not using his constitutional authority.

He said there are serious problems with the constitution, as the executive is divided.

“It’s not divided in the middle, but a major part is in the hands of the president,” he explained.

“This means that when he need to fire the government, he can fire it or not. He says he won’t use this authority and will behave well, but excuse me. We’re not naïve and this team didn’t give me reason to trust them they won’t make decisions of state importance.”