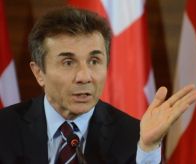 TBILISI, DFWatch–Prime Minister Bidzina Ivanishvili will today name his successor. The Georgian Dream political council will first discuss this issue after which Prime Minister will present the candidate to the parliament majority.

Ivanishvili will meet with Georgian Dream members of parliament today at 15:00 to inform them about the new candidate for prime minister.

Sergeenko on Friday said that there are many respected candidates in the coalition who may be picked for the top post, and that there have been no consultations with him about this issue.

MPs for the Georgian Dream coalition say only that the next PM is a member of the cabinet.

The Georgian Dream political council will also discuss the issue of who will replace the minister who becomes prime minister.

Kaladze said in an evening talk show on Imedi TV that Gharibashvili is an honest person with a clean past and that he will welcome it if he is named as new PM.

“He has all the skills to be the country’s prime minister,” he added.

Kaladze underlined that he had no specific conversation with coalition members about the candidacy for new prime minister.

“Tomorrow people will learn who will be new Prime Minister of the country. They will also name who will be new Interior Minister,” he said, and added that there might be some changes in the cabinet.