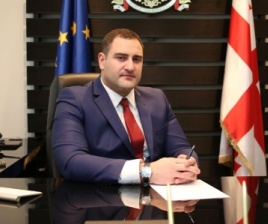 Chikaidze was presented by Prime Minister Gharibashvili on Saturday.

He was appointed as chairman of Tbilisi main police department from March 2013.

Chikaidze has also been head of police in Kakheti, and in Gldani-Nadzaladevi in Tbilisi, where he rose to the post from serving as investigator in 2010-2011.

“Lexo (Alexandre) started work at our ministry a few years ago and he went through each level very successful – he was beginner operative employee, then he became investigator and afterwards he moved as a head of one of the departments in Tbilisi, and then I appointed him as chairman of Kakheti regional police department and he carried out his duties perfectly,” he said, adding that he is sure Chikaidze will be a good minister.

“Lexo showed he can be a manager,” he remarked.

Chikaidze thanked Gharibashvili for the trust and said that he will do his best to ‘honorably continue’ what Irakli Gharibashvili has started.

Prime Minister Bidzina Ivanishvili, who is leaving politics in late November, recently announced Irakli Gharibashvili as his successor who will be presented in parliament after the inauguration of the new president on November 17.