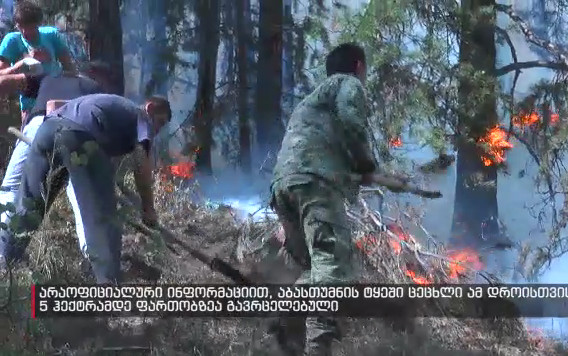 TBILISI, DFWatch–Just days after a massive wildfire was contained inside one of Georgia’s national parks, another one has flared up in another area of the same park.

This time, it’s the resort area of Abastumani which has been hit by forest fire. The affected site is not far from the border with Turkey, and lies in the westernmost end of the Borjomi-Kharagauli National Park.

A hundred hectares of endemic forest was destroyed in the first fire, which Prime Minister Giorgi Kvirikashvili declared contained on August 26.

The first blaze raged near Borjomi, one of Georgia’s key tourist destinations, and was extinguished with the help of personnel and helicopters from neighboring countries, as well as Belarus.

But just days later, Georgia has had to direct hundreds of firefighters to a new location, the picturesque forest surrounding Abastumani, which historically has served as a resort for curing tuberculosis.

The fire outbreak is in a remote area, and a makeshift road was created so heavy machinery and equipment could reach the center of it.

Personnel are working throughout the night, with up to 500 firefighters involved, the Ministry of Internal Affairs stated. Local volunteers are also taking part in the effort to contain the fire.