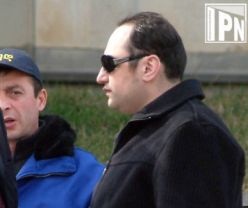 TBILISI, DFWatch–New details have been revealed about the murder of Buta Robakidze, while the former head of the interior minister’s press office was detained.

Guram Donadze was charged for abuse of powers. Specifically, he is accused of ordering the filming of video footage of a weapon which was placed at the scene of the murder. He was detained on Saturday, when he arrived to Georgia from Turkey.

Buta Robakidze died during a police operation on November 24, 2004. It was said at the time that he resisted the police together with his armed friends, and that the police was forced to open fire, but there were suspicions that the police lied about what happened and that he in fact was deliberately killed.

His father tried to reopen the case, but it is only now, eight years later, after Saakashvili has lost government power, that the case has been reopened.

Before his detention, Guram Donadze told Rustavi 2 that he denies guilt, but he confirmed that he was present on November 24, 2004.

“I promise that people will finally learn complete truth on this case,” he said, adding that many new details of this case will be discovered.

“There is footage in Rustavi 2’s archive and until I name anyone, the footage shows who they are. There are current officials as well.”