TBILISI, DFWatch – Georgian TV stations have released information about who owns them.

It has long been a general impression, but hard to prove, that Georgian TV stations are controlled by the government. The information substantiates these suspicions and shows to what extent persons around the country’s president have a stake in the broadcasting media.

This comes as the result of a new law about transparency in media ownership, which is the initiative of the civil sector.

For the last couple of days, Imedi TV and Rustavi 2 have published what is called declarations of conformity, where the names of the new and old owners are listed, as well as the size of their shares.

The owners of Imedi TV according to the document are Joseph Kay (10%), Giorgi Arveladze (45%), Giorgi Korakhashvili (30%) and Giorgi Mikeladze (15%). These people are holders of the company Georgian Media Production Group, which is 100% shareholder of Imedi TV.

Until November 2011, 90% of the company was registered offshore, while 10% was owned by Joseph Kay, cousin of Georgian tycoon Badri Patarkatsishvili, who intended to go into politics but died shortly after the presidential election in 2008.

Patarkatsishvili was owner of Imedi during the turbulent summer and fall of 2007, which culminated in the police storming their studios and shutting it down. Imedi was then subject to a strict regime by authorities, which had taken it over but with Patarkatsishvili as formal owner until his death, where it was prevented from reporting anything political. Imedi remained an apolitical channel until the two elections of 2008 had been conducted, then gradually got into normal operation under its new owners.

Giorgi Arveladze has been a key figure in Georgia since the Rose Revolution in 2003. He was Minister of Economy for a while and later appeared at Imedi TV as general director. Today it has become clear that he’s a 45% shareholder of the TV station’s holding company.

Giorgi Korakhashvili, 30% shareholder of the holding company, is head of a popular computer company in Georgia called Algorithm and husband of the popular folk singer Nino Chkheidze. According to news agencies, this company donated 50 000 lari to the ruling party in 2010 and this company was one of the two companies participating in a government project called ‘computer for everyone’; the company produced 60 000 notebooks for first grade pupils in 2011.

Businessman Giorgi Mikeladze (15% shareholder) owns the company Benet and Benet Capital, which was involved in a number of Tbilisi City Hall projects.

According to the changes in the law about broadcasting, license holder companies which are registered offshore were prohibited from broadcasting and became obliged to publish information about their owners on their websites.

Yesterday, another declaration of conformity was published on the webpage of Rustavi 2. It showed that 90% of this television station and also TV Company Mze is owned by Levan Karamanashvili, while 10% owner is director of Rustavi 2, Giorgi Gegeshidze.

Before December 2011 the holders of Rustavi 2 were the offshore registered companies Dexon Limited (70%), whose representative was Giorgi Gegeshidze, and Chemexim International (30%), both companies were also holders of the Company Mze.

In connection with these new statements, online newspaper Netgazeti is reporting about Levan Karamanashvili, who as it emerges is a distinguished poker player and a close relative of Georgian president Mikheil Saakashvili’s close friend Givi Karamanashvili. The paper quotes from a speech made by Saakashvili in 2005, where he speaks about his friend Karamanashvili.

The names of the other Georgian TV company holders have also been published; including TV Company Sakartvelo, and Evrika, broadcasting under the name Ertsulovneba as the channel of the Georgian orthodox church, whose new owner is a holder of the famous Georgian Chocolate company Barambo, having good relations with the government. The government once bought 50 000 pieces of chocolate from Barambo for half a million lari. 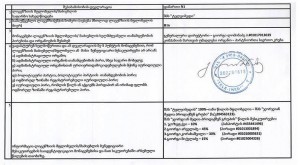