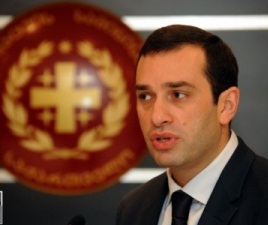 Defense Minister Irakli Alasania is taking measures to deal with a deficit in the defense ministry. (IPN.)

TBILISI, DFWatch — Georgia’s new defense minister says he will take immediate measures to bring the ministry out of a crisis after he discovered that it has a USD 68 million deficit.

Defense Minister Irakli Alasania Friday visited the ministry and said that his new responsible deputy will study the deficit situation and its reasons in detail next week.

He said his first goal will be to avoid problems with feeding the soldiers and providing them with heating as winter is coming.

“A soldier should have all conditions to defend his own country,” he said.

The defense minister held a meeting with employees at the ministry and introduced a plan to develop it further.

After the meeting he told journalists that his main goal is to defend rights of each soldier and to shape Georgia’s army in a fast, mobile, flexible and efficient body. To provide more transparency, civic and media control should be strengthened and strong parliamentary supervision should be established, the minister added.

In order to avoid a conflict of interest, Alasania will leave the Free Democrats Party. He says one of the major priorities is the depoliticization of the defense sector.

The new defense minister says there is not planned any significant staff policy yet.

The defense minister says the defense ministry will fulfill all its international obligations and agreements that Georgia has undertaken. The Georgian contingent will remain in Afghanistan and continue its participation in the NATO-let ISAF operation.

Irakli Alasania said there is also an initiative to establish a military ombudsman to defend the rights of military personnel.