New children’s hospice to be opened in Tbilisi

New children’s hospice to be opened in Tbilisi 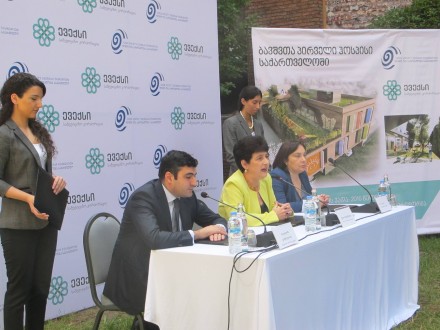 The hospice will open in the end of 2016 in the Vashlijvari district. Construction work will start in July.

This will be the first facility where children will be able to receive free palliative care for chronic and incurable diseases.

The hospice is to work in three main areas: a 24-hour service for about ten children; a day-care center, where children will be able to stay from morning till evening with their parents to get necessary services and a home visit service.

Keti Khutsishvili, Head of OSGF, said on Friday that the idea of having a children’s hospice in Georgia came up after a study carried out in 2013 about the needs of children suffering from long-term conditions.

The study showed that 839 children under 18 need palliative care in a given year.

In April, a group from the Children’s Hospice project visited best examples of such facilities in order to learn about international standards for the future project in Georgia.

Palliative care for children involves taking care of children with chronic or incurable diseases. It aims at easing the symptoms caused by the disease, as well as psychological and emotional support to children and families.

The necessity of palliative care arises when there is a disease which is impossible to cure, like the final stage of cancer, diabetes, or severe forms of cerebral palsy.