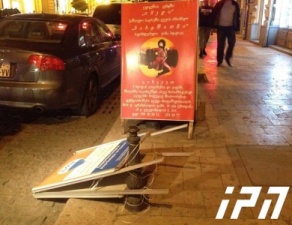 TBILISI, DFWatch–Eleven people were detained for hooliganism Tuesday night during a rally of radical Georgian youth groups in downtown Tbilisi.

The police interfered only after the march of Georgian Power, an overtly neo-Nazi bunch of teenagers, went sour, attacking Turkish cafes and restaurants and passers in Muslim apparel.

The demonstration was dedicated to the fall of Sokhumi on September 27, 1993, a tragic event of the Abkhazia War which entailed of massacres of thousands and exodus of tens of thousands of ethnic Georgians from Abkhazia.

Some other radical nationalistic and neo-Nazi groups, including Dinamo Tbilisi Ultras, radicalized football fans, attended the demonstration as well.

They gathered at the Metro Station Rustaveli and walked down to Aghmashenebeli Avenue, a place of many oriental cafes.

The demonstrators, some of them wearing masks, damaged several Turkish cafes yelling ‘Glory to the nation, death to the enemy.’

Only after attacks became sour, and radicals tore veils off at least one Muslim woman, the police started detentions.

There also were squabbles with owners of the Turkish restaurants.

“Participants of the demonstration were particularly aggressive. They insulted citizens and damaged trading properties and cafes, and damaged restaurant banners and signboards,” the statement reads.