NATO top: Georgia can seek membership and be friends with Russia

NATO top: Georgia can seek membership and be friends with Russia 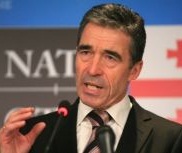 TBILISI, DFWatch–NATO Secretary General Anders Fogh Rasmussen says it is possible for Georgia to have good relations with Russia and at the same time move towards NATO membership.

Rasmussen said there are examples of nations that are member of NATO and have excellent relations with Russia.

He said this during a session of the NATO-Georgia Commission (NGC) on Wednesday. The meeting was held as NATO foreign ministers gathered in the Belgian capital Brussels. The session was closed for the media, except the opening remarks.

“I would argue that actually all 28 NATO allies, at the same time, do have a special partnership with Russia,” he said.

The Danish head of NATO pointed to the NATO-Russia Council as an example of the good relations Russia has with the military bloc, and continued saying that Russia is the only country with which NATO has such a council.

“It is a very special partnership. And there’s no contradiction between being a member of NATO and at the same time being able to have such a relationship with Russia.”

Georgia’s foreign minister Maia Panjikidze met her colleagues, who later expressed strong concern about the resumption of the work by Russian soldiers to build fences and other obstacles along the administrative border lines around two Georgian breakaway regions, and called for their removal, since they affect lives of people and hamper conflict resolution.

Georgia had a peaceful coup called the Rose Revolution in 2003, and afterwards sought membership in NATO, but a brief war with Russia in 2008 set the process on hold.

A new coalition won the parliamentary and presidential elections in the last year, and seeks to mend relations with Russia, while continuing to aspire for NATO membership.

The NGC was created to prepare this process after the Alliance decided in 2008 to accept Georgia as member at some point in the future. Rasmussen said NGC has achieved a lot during its five years of existence.

“We have come closer to fulfilling the promise of Bucharest, that Georgia will become a member of the Alliance,” he said. “We have developed a strong partnership, founded on common values and a robust program to support Georgia’s reform process.”

He drew attention to the fact that Georgia is a leading contributor among non-member states to the ISAF mission in Afghanistan and the decision that Georgia will also contribute to NATO Response Force in 2015.

There is still work to be done, Rasmussen continued, and the alliance remains committed to supporting Georgia.