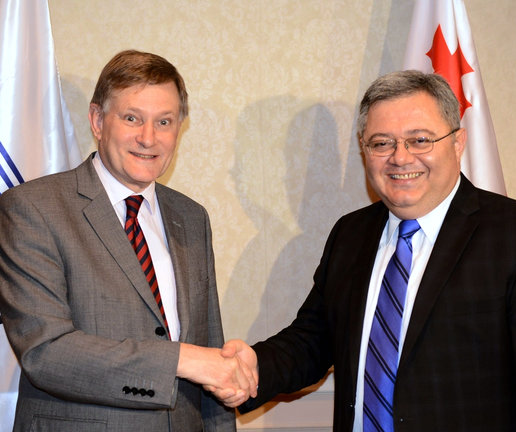 TBILISI, DFWatch–The head of NATO Parliamentary Assembly says the alliance will strengthen its cooperation with countries along Russia’s southwest borders.

Hugh Bayley, a member of the British parliament for the Labour party, says one of the main topics at the alliance’s summit in Wales in September will be how to strengthen cooperation with countries in the region in order to prevent the threat of Russian aggression.

Bayley said this after meeting with Speaker of Parliament Davit Usupashvili in Georgia Friday.

Words and statements aren’t enough to strengthen NATO-Georgia cooperation, he said, but practical steps are necessary to bring Georgia closer to NATO. Bayley underlined that Georgia is one of the alliance’s major partners.

The Parliamentary Assembly stands firmly by Georgia on the way to NATO integration, he added.

Usupashvili said that NATO has to make decisions at the upcoming Wales summit that will strengthen Georgia’s security.

“We’ve agreed that the content of the decision [at the Wales summit] will be the following: a very clear message for everyone that process continues and it continues successfully,” he said.

But there will not be offered a plan for membership, a so-called MAP, at the summit, NATO officials made clear a few months ago. Instead, they speak of a ‘substantive package’.

“The summit in Wales will not be about a Membership Action Plan; but about more support to bring Georgia closer to NATO. And it will be a substantive package,” NATO Secretary General said a month ago.