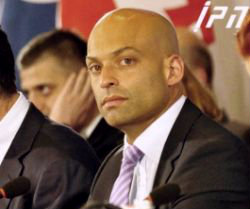 Defense Minister Irakli Alasania participated in NATO’s ISAF meeting on Thursday at NATO headquarters. After the meeting, he met with Appathurai, NATO Secretary General’s Special Representative for the Caucasus and Central Asia.

“I told him what NATO assesses: he is a leading professional, focused and successful reform,” Appathurai writes on Facebook. “To my mind, he’s also helping Georgia punch above its weight internationally, including in Afghanistan.”

A week ago, he wrote flatteringly about Alexi Petriashvili, Georgia’s Minister for Euro and Euro-Atlantic Integration.

“Once again, Georgians can be very satisfied with the work of their representatives on the international stage,” he wrote on Thursday.