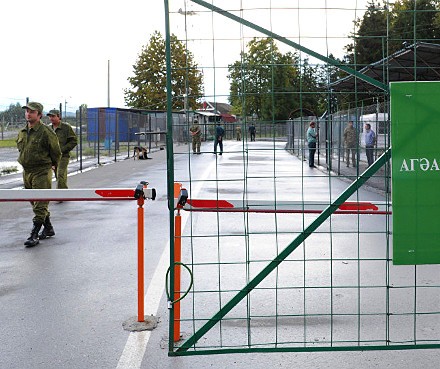 TBILISI, DFWatch–NATO is concerned that the closure of two crossing points between the breakaway region Abkhazia and the rest of Georgia may have adverse impact on the local population. A spokesperson for the alliance on Tuesday asked for the de facto authorities to reconsider the closure.

“We call for the reconsideration of these proposed closings, to ensure freedom of movement for citizens,” NATO spokesperson Oana Lungescu said in a statement.

The de facto authorities in Abkhazia’s administrative center Sukhumi decided at a cabinet meeting on December 28 to close Nabakevi and Otobaya border crossings which connect the breakaway region to Georgia proper.

Following the closure of the checkpoints, local residents living in Nabakevi held protested on January 25.

The only public crossing now open is the bridge across the River Inguri near the town Zugdidi. Another crossing is also open, but it is exclusively used for reconstruction work on the Enguri hydropower plant and is situated further upstream, near Jvari settlement.

“Closing these crossing points, which are used daily by hundreds of citizens, will have a negative impact on the situation on ground and stability in the region,” Mrs Lungescu said. “It will restrict freedom of movement, affecting the livelihoods of local residents.”

“As stated at the Warsaw Summit, NATO continues to support Georgia’s territorial integrity and sovereignty within its internationally recognised borders. We call on Russia to reverse its recognition of the South Ossetia and Abkhazia regions of Georgia as independent states.”