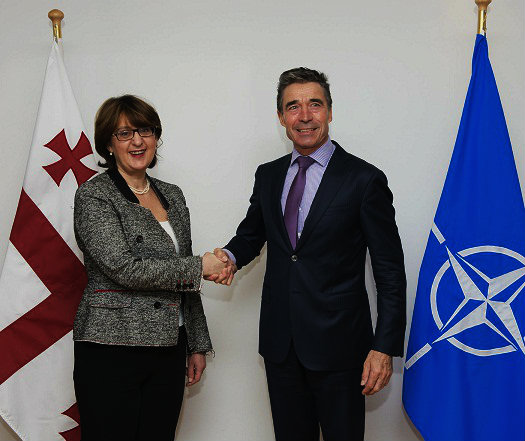 “At this time, it is more important than ever to stress that the breach of territorial integrity and sovereignty is unacceptable,” Anders Fogh Rasmussen said at a meeting of the NATO-Georgia commission in Brussels, held in connection with the meeting of NATO foreign ministers.

Rasmussen said at the opening of the meeting that one of the topics was, as he described it, “the crisis in NATO’s neighborhood caused by Russia’s military aggression against Ukraine”.

“That nations have the right to make their own free choices. And that those choices should be respected by all.”

Rasmussen said that Georgia has made ‘remarkable progress’ in democratic and defense reforms and further progress will require constructive cooperation between the government and the opposition.

“Following the presidential elections last year, the upcoming local elections in June will be another important milestone for Georgia’s maturing democracy,” he said.

An assessment team from NATO last week was on a four-day visit to Georgia under the auspices of the Partnership for Peace.

“We also had a comprehensive discussion of Georgia’s contribution to NATO-led international operation in Afghanistan and our future plans in this regard,” said Deputy Defence Minister Mikheil Darchiashvili.