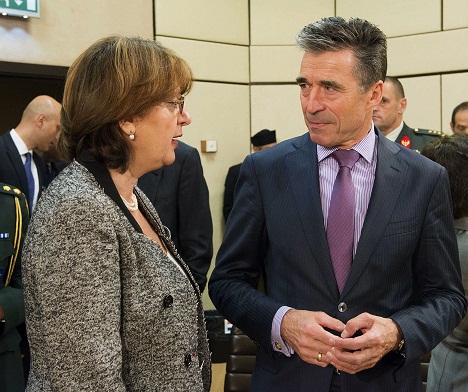 TBILISI, DFWatch–NATO chief Anders Fogh Rasmussen does not rule out that the alliance might give Georgia a Membership Action Plan (MAP) at the summit in Wales in September.

At a press conference in Brussels yesterday, a journalist from Georgia’s Public Broadcaster confronted him with US President Barack Obama’s comment apparently excluding the possibility of Georgia receiving a MAP; a stepwise plan ultimately leading to full membership.

Rasmussen responded that Georgia is a key partner which made significant progress in Euro-Atlantic aspirations; the country conducted ‘exemplary elections’; is contributor of NATO-led operations and announced that it will contribute to the NATO Response Force in the future, but he added that there is still work to do.

“As regards your specific question, Membership Action Plan, it is much too early to say anything about how we will address the open-door policy at our summit in Wales,” he continued.

Rasmussen recalled that NATO made a decision in 2008 that Georgia will join NATO if it fulfills the necessary criteria.

“The four countries that aspire to become future members of NATO will not be assessed or considered as a group. But we will have a look at each individual country,” he noted.

Rassmussen was in Brussels in connection with a meeting of NATO foreign ministers, and also attended a meeting of the NATO-Georgia Commission where he also met Georgian Foreign Minister Maia Panjikidze.