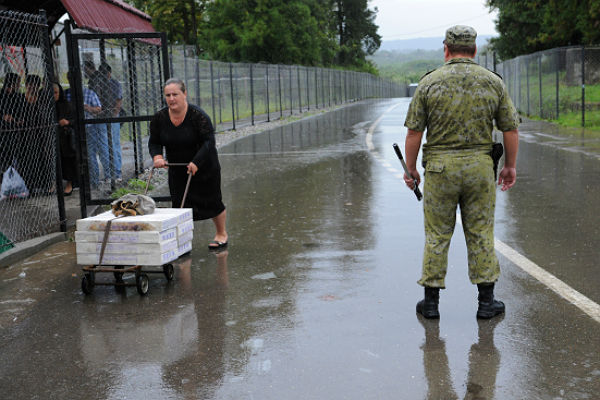 The incident happened after the de facto authorities closed all but one of the crossings along the administrative border line that separates the breakaway republic from the rest of Georgia.

Temur Nadaraia, who heads the de facto administration of Gali, told Abkhaz media that when Nabakevi’s checkpoint was closed, the Abkhaz authorities were asked by the NATO leadership to reopen it.

“Three checkpoints were functioning in the villages Tagiloni, Nabakevi and Otobaia. All three were closed, and now only the central crossing point at Enguri is in operation. When we closed the Nabakevi checkpoint, the NATO leadership asked Abkhaz authorities to reopen,” Nadaraia said.

“The Enguri checkpoint, in its current form, functioning only on the basis of goodwill by the Abkhaz side, because most of the population in Gali has close relatives on Georgia’s territory. Also on humanitarian grounds. The border works as it works. From 7 am to 8 pm,” he said.

Since June, the Enguri Bridge crossing has been operating in a limited mode. Men between the ages of 18 and 60 are not allowed to cross the ‘border’. Every day, the population is waiting for restrictions to be lifted, but in vain.

When Sokhumi closed down all but one checkpoint with Georgia proper in 2016, it was explained by breakaway authorities as part of the fight against corruption.