Rally in Tbilisi to demand ‘illegal’ immigrants kicked out

Rally in Tbilisi to demand ‘illegal’ immigrants kicked out 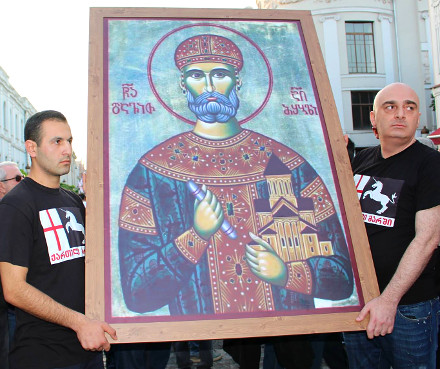 TBILISI, DFWatch–Nationalist groups in Georgia mobilized supporters Friday for an anti-immigration rally in the center of Tbilisi.

Activists carrying flags and slogans for nationalist causes demanded ‘illegal’ immigrants kicked out of the country and called on authorities to bring in stricter immigration rules.

Despite fear of events descending into violence, there were no reports of incidents.

The anti-immigration activists direct their ire mainly toward people of Asian origin. Many of the Asian restaurants and bars on Aghmashenebeli Avenue were closed during the rally, while hundreds of police provided safety.

Some of the slogans during the protest had anti-Muslim overtones, such as calls to restrict immigration for ‘Arabs and Iranians’.

One of the organizers, Sandro Bregadze, a former deputy state minister for diaspora issues, also proposed a ban on foreign financing of NGOs.

He further demanded to outlaw the United National Movement, the former ruling party of Mikheil Saakashvili.

Organizers of the ‘Georgian March’ gave the authorities a one-week deadline to fulfill their demands, otherwise they threaten to launch other, even more radical protests.

Only members of two mainstream political parties – Alliance of Patriots and Democratic Movement – attended the rally. The former won six seats in the parliament in the 2016 elections, the latter has no parliamentary representation but holds a seat in the ruling council of the autonomous Adjara region. Democratic Movement is headed by Nino Burjanadze, a former speaker of parliament.

In September, 2016, eleven people were detained during a Neo-Nazi march in the same place as Friday’s anti-immigration rally.