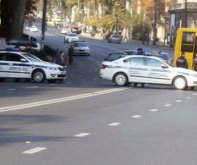 Rustaveli Avenue was blocked for traffic from 12 today, in preparation for the rally. (Interpressnews.)

TBILISI, DFWatch–Former government representatives from the years following the rose revolution in 2003 are holding a rally in central Tbilisi today to protest against Russia’s annexation of two breakaway regions.

National Movement members claim this is a non-partisan rally and that the goal is to send a message to the international community.

But the majority of rally participants are likely to be the members of that party, and organizations that support the party, so many consider the rally to be partisan.

Member of Parliament Davit Bakradze from the National Movement says that while Russia annexes Abkhazia and South Ossetia, all the attention is on Ukraine and no-one is talking about Georgia anymore.

Other of the party’s members claim that if Abkhazia signs a military cooperation agreement with Russia, which has been widely discussed recently, Russia will annex Georgian territories. The agreement might create a unified armed forces of Russia and Abkhazia.

But Prime Minister Irakli Garibashvili thinks the purpose of the rally is ‘ridiculous’, and that the National Movement is planning provocations today.

In a comment he recalled the war with Russia in 2008, and said that a political party which ‘organized the occupation of Tskhinvali’ should organize a rally against themselves. The ones demonstrating were members of the government during that war, when Georgia lost Tskhinvali and Russian troops were located in less than 40 kilometers from Tbilisi.

Members of the Georgian Dream coalition say they don’t exclude that the National Movement may even attempt to destabilize the country.

Interior Minister Alexandre Chikaidze spoke about such a danger a few months ago. In an interview with Prime Time, he said the National Movement was preparing to replicate the protest camps in Kiev one year ago – what’s dubbed a ‘Euromaidan scenario’ – in Tbilisi.

“They might mobilize people associated with criminal and a number of crimes,” he said.

The Interior Ministry is investigating a coup attempt, but Chikaide said there will be made no comments about the case until the investigation is finished.

It is not yet known whether other political parties will join today’s demonstration. But a counter demonstration by a group of conservatives is planned close to where the National Movement is planned.

The Interior Ministry issued a statement on Friday saying that the government respects the right to free assembly so the police will be protecting the November 15 demonstration on Rustaveli Avenue.