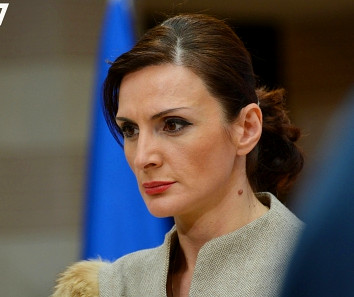 Ani Mirotadze said the National Forum is target of a political ploy. (Interpressnews.)

TBILISI, DFWatch–The home of a candidate for parliament from the National Forum was broken into Thursday night, a few days after the party’s office was robbed.

Tamar Tsikhiseli told journalists that the burglars didn’t steal anything. She thinks the people who broke into her house were there to dig up information about the party. In that case, the plan failed, she added.

“They didn’t take any jewelry, or equipment. They were looking for a particular information source.”

Two days ago, someone broke into the National Forum’s office on the outskirts of Tbilisi and stole computers. Party members claim that all the information about the upcoming election was kept there. They think the robbery was politically motivated.

Tsikhiseli, who is a majoritarian candidate in the October 8 election, said two days ago that the robbers were looking for her computer and data about the election.

Another of the party’s members, Ani Mirotadze, said today that they are dealing with a political ploy.

“It is clear that these people were looking for specific information and they probably believed that this information was kept in the house of Tamar Tsikhiseli.”