Muslims conduct prayer on ruins of mosque in Mokhe

Muslims conduct prayer on ruins of mosque in Mokhe 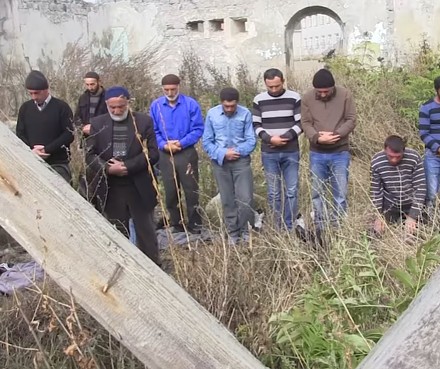 TBILISI, DFWatch–Muslims in the village Mokhe in the south of Georgia on Thursday conducted a prayer on the ruins of a mosque which the local government in 2014 declared that it wanted to turn into a culture house.

The plans by local Orthodox Christians to appropriate the old mosque for their use sparked a conflict, and local online news website Samkhretis Karibche (SKnews), reported that the ceremony on the ruins in Mokhe , near Adigeni, took place exactly two years after the conflict began.

Tengiz Beridze, one of the local Muslims, told Sknews that they came to mark the Day of Ashura, the tenth day of Muharram, Sorrow Day, which is usually observed on October 10.

“We have waited too long with all the promises, the documents, appealed to the government many times. Our demands are within the law, our desire is lawful,” he said.

Muslims have had to to pray at the house of one of the locals because the village has no mosque. The owner of the house now wants to get back his property and they have nowhere else to pray.

There were claims that the building in Mokhe belonged to Christians. In the wake of the conflict, a commission was created to determine the origins of the ruins. After two years, the commission still hasn’t produced any results.

Sknews quoted local Muslims saying that if the commission decides that the ruins belonged to another religion they will be OK with that, but will ask the government to permit the construction of a new mosque in the village.

Mokhe Muslims now want to clean the ruins and build a roof over them for the winter.