Musician says he was pressured by police

Musician says he was pressured by police 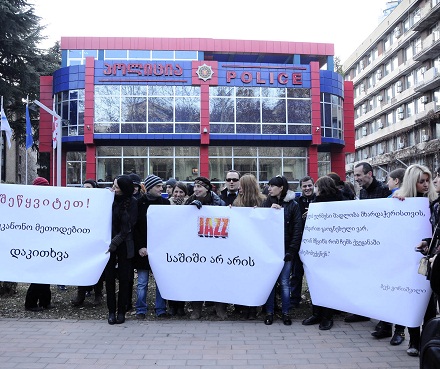 TBILISI, DFWatch — A well-known Georgian musician claims he was harassed by police during a short stay in Georgia.

Beka Gochiashvili, 16, a jazz pianist who lives in the US but spent his holidays here in Georgia, told the TV station Rustavi 2 about the incident in an interview via Skype. It happened on January 8 as he was questioned as a witness in connection with the robbery of his neighbor’s house.

He says the interrogation lasted for six hours.

“There were threats that if I didn’t admit to something, they wouldn’t let me go back to the US,” he says. “I’m astonished and very concerned that such a thing took place and how I was treated in my country.”

He did not specify what police wanted him to admit to.

“I told them I would cooperate with them to investigate this case,” he said, adding that his brother, who was also questioned, was subjected to pressure too and had to stay at the police station for three hours, during which time he was verbally abused and threatened.

Gochiashvili’s father attended his interrogation process, but he wasn’t allowed to attend questioning of his brother, as he is an adult.

Interior Minister Irakli Gharibashvili instructed the general inspection of the ministry to start looking into the case. The Interior Ministry says the findings will be made public because of the great public interest.

If the findings confirm that Beka and Lasha Gochiashvili were subjected to pressure during interrogation, the ministry promises to react in accordance with law.

The ministry also published information about the case the brothers were questioned about. A neighbor’s house was robbed January 4. The thieves took a safe with 60 000 euro, 20 000 lari, USD 10 000 and jewelry worth USD 300 000.

According to the police, Beka Gochiashvili was questioned because he was one of several people who had the key to this house, and was allowed by the owner to use it for one day to host his friends.

A rally was held Tuesday to demand the dismissal of punishment of the policemen who interrogated the brothers.

“Pressure against Beka means that such methods will be used against people who are not as famous as he is,” organizers of the rally say.