Mine worker in Tkibuli found dead from apparent suffocation

Mine worker in Tkibuli found dead from apparent suffocation 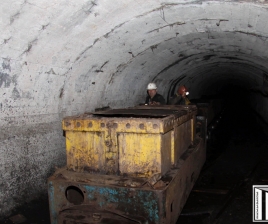 TBILISI, DFWatch–Workers in one of the mines in Tkibuli in western Georgia found a co-worker dead on Friday, apparently from gas poisoning.

The accident happened in the Mindeli mine. Workers found the body in the morning as they arrived at work.

It looks like 51-year-old Temur Kakauridze suffocated due to carbon dioxide poisoning, head of the miners’ and metallurgy workers’ trade unionTamaz Dolaberidze said. The dead worker had injuries on his nose and forehead and appears to have fallen down.

One of the other workers in the Mindeli mine claims that there was a build-up of methane and carbon dioxide at the sixth district of the mine.

“It is important now to find out if the management knew about the accumulation [of poisonous gas] and if it is allowed to go down in the mine alone in this situation,” Dolaberidze wrote on his Facebook page.

The Trade Union sent its condolences to the family of the victim.

Kakauridze was employed in the Mindeli mine three months ago.

An investigation has been opened for violation of security measures during mountainous or other works resulting death, under article 240 of the Criminal Code.

Workers in Georgia’s mines have demonstrated and gone on strike against dangerous conditions, poor safety measures and regular fatal accidents.

Reacting to this latest accident, Georgia’s ombudsman Ucha Nanuashvili called for the reintroduction of a labor inspectorate, which was disbanded by President Saakashvili in 2006.

He also called for Georgia to ratify ILO conventions 81, 129 and 155, as well as article 3 of the European Social Charter, about health and safety in the workplace.