Metal workers in Zestaponi are holding out

Metal workers in Zestaponi are holding out 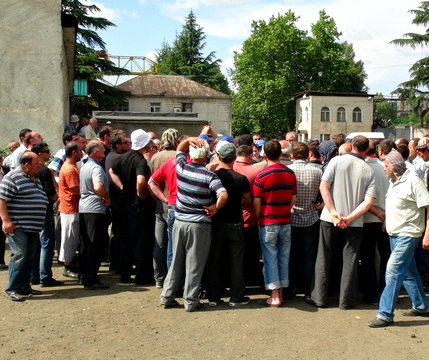 Metal workers in Zestaponi are keeping up their strike. (Zestaponi.com.)

TBILISI, DFWatch–Workers at the Chiatura Mining and Enrichment Plant will May 25 join the strike at the Zestaponi Ferroalloy Plant, which started four days ago, while three persons Thursday went back on hunger strike in the same conflict.

The workers who are on hunger strike are Anton Bibilashvili, Ramaz Peradze and also Goga Bregavadze, who chairs trade unions of Zestaponi’s Ferroalloy Plant.

According to the trade union, workers are trying to conduct constructive negotiations, but ‘there was pressure, blackmailing and irresponsible statements’ from the management; that’s why the protest has not ended yet.

Representatives of the company which owns the Zestaponi plant is maintaining their position that they won’t accept any ultimatum from the workers and will cut down the salaries for absent hours.

May 23, workers blocked the railway which enters the plant. Manganese is transferred from Chiatura, a small mining city, straight down to Zestaponi’s Ferroalloy company for further processing.

Goga Bregvadze, representative of local trade unions, says the workers are preparing for a rally in Chiatura as well, as a sign of solidarity.

The workers’ main demand is to have an opportunity to sign collective contracts, increase in salaries by 50 percent and compensation for nigh shifts. The rally started May 21.

Workers claim they received threats and warnings from management that if workers don’t go back to work they will end their insurance, fire them and hire new workers. But yet they do not give up. Hundreds of workers are on strike.

“The management of the company hopes that the workers will agree with our statement,” the press office of Ferroalloy plant writes in a short warning, published on Thursday.