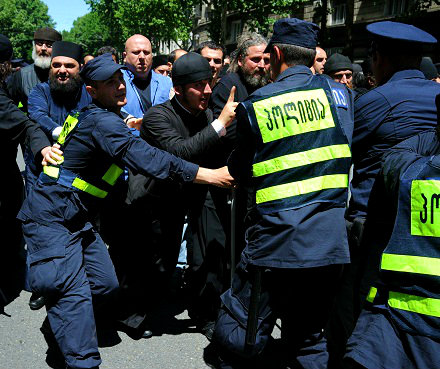 The petition asks for punishment of perpetrators of violence May 17. (Interpressnews.)

TBILISI, DFWatch–About 15 000 persons have signed a petition that asks to punish those who committed violence on May 17.

After clerics and parishioners attacked a peaceful demonstration by LGBT persons and their supporters on May 17 to mark the International Day Against Homophobia and Transphobia in the center of Tbilisi, part of society has appealed to President Mikheil Saakashvili, Prime Minister Bidzina Ivanishvili and Speaker of Parliament David Usupashvili.

The petition gathered about 15 000 signatures in less than one week and demanded to punish violators, including clerics too.

On May 21, the police arrested 4 persons who participated in the dispersal of the LGBT demonstration. They were accused of minor hooliganism, and the maximum sentence they may risk is up to 90 days of administrative arrest or a fine ranging from 100 to 400 lari.

Not a single cleric has been punished so far. On May 23, police pressed charges against archimandrite of Sameba cathedral, Father Anthimoz (Tamaz) Bichinashvili, and monk from “Ioane and Tornike Eristavi convent” Father Iotam (Irakli) Basilaia, who chased demonstrators with a chair. The investigation in this case is continuing.

Thomas Hammarbarg, the EU’s special adviser to Georgia in legal and constitutional issues, said that in his opinion, the Church won’t be against punishing guilty clerics, and the prime minister has said that being a cleric is not an excuse for violent behavior.

Transparency International Georgia and Identoba, an organization that protects the rights of LGBT people, claim that the number of violent incidents has increased after May 17. About 30 person have been physically and verbally abused during the last week.

Transparency International, Georgian Young Lawyer’s Association, International Society for Fair Elections and Democracy and other civil groups made a joint statement and called on the Interior Ministry to investigate and bring to the justice everyone who prevented citizens from conducting a rally against homophobia and abused them physically and verbally.