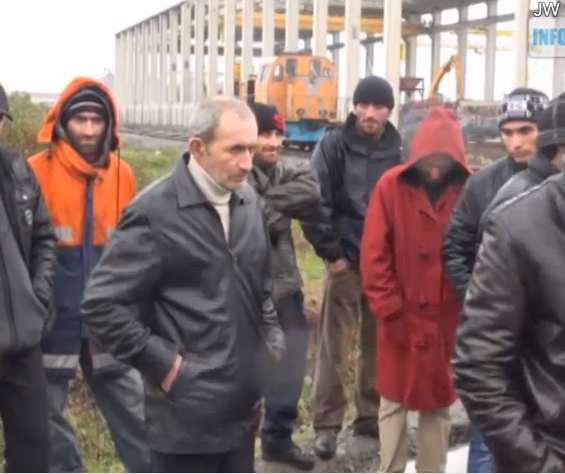 Striking workers are blocking a railway line in Poti.

TBILISI, DFWatch–The management of the metallurgical plant in Poti has fired nine employees the day after the port workers there went on strike.

This decision led to a renewal of the workers’ rally, who at first demanded better working conditions and normal salary, but now also are demanding to rehire the fired workers, which they think were unfairly fired.

According to reports in the local media, the striking workers have blocked the main railway line, stating that if the management doesn’t satisfy their demands, they won’t lift the blockade.

“Instead of starting a dialogue with the employees, they have fired five trade union members and four rally activists, who were leaders of this process,” Tamaz Dolaberidze, Chairman of the Metallurgical Trade Unions, told Interpressnews.

According to Dolaberidze, Indian workers expressed solidarity with the strikers and didn’t appear to work; however the administration forces them to work.

Davit Kvitsiani, lawyer of the metallurgical plant claims on the contrary that strikers do not let Indian workers work. He also said that the demands of the strikers are in the process of being reviewed and ‘within the frames of the law, management will soon make the decision.”