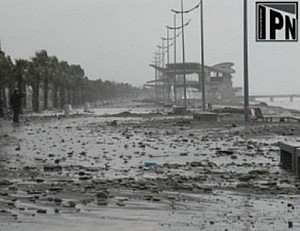 Batumi, the epicentrum of Georgia’s nascent tourism industry, has been mostly affected. Batumi’s famous beaches that host hundreds of thousands of tourists each summer season is damaged as well as the famous Batumi Boulevard. Locals post photos from the region of damaged beach, gardens and boulevards.

Tens of thousands people are left without electricity, according to Energo-Pro Georgia, a distribution Company, which informs that due to a harsh weather restoration works are difficult to carry out. The company’s crews work in an emergency regime, Energo-Pro claims.

According to the Batumi emergency service the storm started at about 5am on Sunday morning.

Locals claim they haven’t witnessed such a storm for the last eight years. 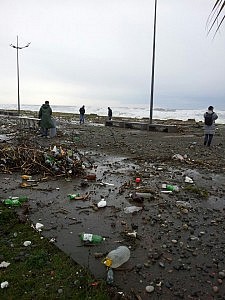 Sarpi town locals reported to journalists that they’d seen a man, about 55, fishing shortly before the storm began and looked at how the waves took him away. Rescue teams are searching after him.

40-meter protective construction of a shore of Kobuleti town, another resort town of Ajara, was also damaged by the storm.

Even roofs of several houses in Tbilisi districts were also damaged and few families are left houseless. Roof of the brand-new House of Justice, the pride of president Saakashvili government, is also reported to be damaged by the wind, but the damage doesn’t seem to be serious.

A man was injured in Gori, a town in Eastern Georgia some 70 kms away from Tbilisi, where the roof of the house dropped off and fell on the car. The driver was rushed to the local hospital with head injuries.

Ministry of Infrastructure and Regional Development informs that the storm has seriously damaged regions of Adjara, Guria and Gori as hundreds of buildings, especially one to two story private houses, are left roofless, while there are serious problems regarding reinforcement dikes damaged in Kobuleti and Ureki.

Nodar Khaduri, the Finance Minister, stated on Saturday that the ministry will immediately start counting the loss and restoration works would start in nearest days.