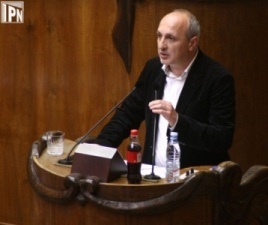 Changes have been made in the government, with Vano Merabishvili being appointed prime minister Saturday, and Monday he presented the new government’s action plan to parliament.

Yesterday, Prime Minister Vano Merabishvili said he would give each family a one thousand lari voucher, which may be spent the next four years.

The plan explains that government will have to support people until the unemployment problem is overcome. “A strong family is a strong Georgia,” the document says.

According to the plan, the government wants to increase pensions, and create conditions for people to get employed, strengthens health care, but never knows what other specific problems specific families may have, so this voucher will be an opportunity for families to decide where to spend this money.

When it comes to developing agriculture, the government plan sets out to buy 2 000 additional tractors, combine and aggregate, as well as provide each village with natural gas, satisfactory water supply and roads.

Next steps is to create more than 500 new agricultural businesses, irrigation of an additional 90 000 hectare lands, and make water drainage system over 35 000 hectare in order to improve agriculture lands to increase the harvest.

The story of Georgia’s future continues with creating 273 000 job places. The basis for this, according to the plan, will be growth in private business and development of infrastructure. The main goal is to improve the business environment and continue infrastructure projects, which this government has been doing for years.

Now the government expects to see more than four billion lari in direct investments, which will create about 80 000 job places. The president suggested former Prime Minister Nika Gilauri, who mainly worked with economy, to chair a government investment fund which will work to attract more foreign investments, but it is still unknown whether Gilauri will accept the offer.

Next goal is to increase the number of tourists to seven million, thereby creating an additional 140 000 jobs, but the recent studies show that first, the government doesn’t have a proper system to count the real number of tourists. It only counts the total number of visitors to the country. A second problem is that along with increasing number of visitors, the unemployment level also increases. The new plan therefore presents impressive numbers, but does not describe how to achieve the desired results.

It further states an intention to build 5 000 kilometer of roads, which should mean 40 000 stable jobs. The plan also mentions the construction of 15 new hydroelectric power stations and to start 12 new ones, additional 13 000 job places.

Yesterday it became known that the new position of employment minister is established which will coordinate problems in this area.

On the president’s initiative, the new action plan includes an increase of the pension package, which includes health insurance, to USD 100 from 2013.

Another goal is that each family should have insurance. According to the document, from September 1, 2012, 2.4 million citizens will use health insurance, 1.9 out of which will be insured by the government, half a million has private insurance.

Children under five, teachers, refugees, those in the military, policemen, pensioners and socially vulnerable will have health insurance. And if a person doesn’t belong to any of these categories he will have a basic insurance package.

Looking at just the titles of the government action plans from 2003, we get the following picture: In 2004, the government’s action plan was titled ‘For a United and Strong Georgia through Economic Growth, Long-term Stability and EU-integration’. The title stayed the same until 2006, when it was shortened to ‘For a United and Strong Georgia’. Two of the government’s action plans had the same name, when in November, 2007 Vladimer Gurgenidze presented a new plan with a completely new name, ‘Georgian Government for Employment and Welfare’, but lasted only a year. The next four plans where called ‘United Georgia without Poverty’.

The first plan was partly implemented, as the government promised to overcome corruption, improve the business environment. But on the other hand, Saakashvili until recent period always promised Georgian integration in the EU and NATO during his presidency.

At first, the government focused on infrastructure. Its priorities were energy, transport and communication, tourism, but very little social sectors.

Then at the end of 2004, Kakha Bendukidze was appointed new Economy Minister. He brought many changes. The goals and plans of the government were in fact economic.

As part of the reforms many areas were deregulated. This marked the start of a liberal policy meant to provide for competitive market conditions. Again we see nearly no policy in the social sector.

The program remained the same until 2006, when the name was changed again. The document, which used to be 30 pages, was reduced to four pages. Again, we see terms like economic growth, support employment, economic freedom, protection of privacy, more job places in private sector and also development of infrastructure.

In 2008 it changed completely. There were two main principles implementation of large scales social programs directed against poverty and to provide economic growth with fast and large effect. The program spans five years, ending in 2012.

It contains a promise that the economy should grow 8 percent each year while keeping inflation low, and increasing export and foreign investments by 10 percent each year. By the end of these five years, export should have been 40 percent of GDP.

Now for the first time we see more detailed goals about the social sector. On the grounds of 10 billion direct foreign investments, there was a promise to employ about 200 000 persons. Also there is talk about pension reform and a goal that pensions will become USD 100, which we now see in the new government’s action plan. We also see a mention of state insurance for 1 200 000 persons for the following groups: families under the minimum wage, school children, military servicemen and police.

Again there are parallels with the new action plan, as there are described goals within agriculture, such as creating more than 200 agriculture businesses, employment of 10 000 people, increase of irrigation area with 2.5 times.

But then, the next plan was affected by the Russian-Georgian war. This plan spanned only 18 months. The goal is to restore the previous situation, effectively use assistance from the international community, and carry out radical democratic and economic reforms.

When Nika Gilauri became prime minister, his priority was to create tens of thousands of new jobs. The previous action plan was not mentioned. Emphasis is again placed on infrastructure projects.

The next plan, also with Nika Gilauri as prime minister, again mentions nothing about previous plans and whether they were carried through. We see unemployment as the main problem and infrastructure as a priority.

In 2011 came the government’s famous ten point plan. This was to span the years until 2015: 1) Macro-economic stability; 2) Improvement of the current account balance; 3) Creating/keeping best environment for business and investment; 4) To form a regional trade and logistics center; 5) Improving infrastructure; 6) Agricultural development; 7) Improvement of the education system; 8 ) Development of social policy; 9) Creating an accessible, high-quality health-care system; 10) Urban and regional development.

Today, agriculture accounts for barely 9 percent of the country’s GDP, while trade makes up 17.3 percent. The rate of unemployment is increasing, while about half of the population is employed in agriculture and are self-employed, foreign debt has tripled for last three years and equals to about USD 11.5 billion. Increase in direct foreign investments is observed and 8 percent growth at the beginning of 2012.

The government’s previous action plans were reviewed in a recent report by Liberal Academy, as reported by DF Watch.