Merabishvili on hunger strike, demands TV in his cell

Merabishvili on hunger strike, demands TV in his cell 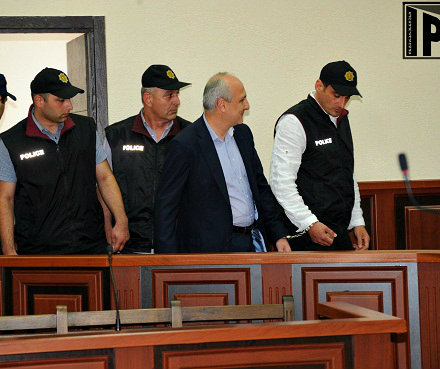 TBILISI, DFWatch–Vano Merabishvili, Secretary General of the United National Movement party, has gone on hunger strike in prison to demand a TV set.

When contacted by DF Watch, representatives of the Prison Ministry were only willing to say that he really is on hunger strike and will be under medical observation.

When asked whether his request will be granted, the ministry claims that the prison administration is acting in accordance with law.

Merabishvili’s lawyer Giorgi Chiviashvili informed about his protest on Monday.

The former Interior Minister is charged in several cases, involving abuse of powers, embezzlement of state money and appropriation of another person’s property, but members of the UNM think there were political reasons for his detention. They point out that he was considered a presidential candidates in the upcoming election.

Merabishvili’s lawyer says his client wants to have TV set in the cell. His other demand is that the prison administration must gave allow his family to manage his bank accounts.

Chiviashvili explains that they have asked the prison management several times, but not received any answer, and that was what precipitated the hunger strike.

Secretary General of the UNM has been demanding a TV set since the day of his detention in order to have access to information. He spoke about this request with Krzysztof Lisek, a member of the European Parliament (EPP), when he visited Merabishvili in prison.

The Prison Ministry representatives then told DF Watch that none of prisoners have a TV set in cells and they cannot make exception for Merabishvili.

Georgian legislation allows prisoners to watch TV, but ministry representatives explain that this happens only if there is appropriate equipment at the prison, while this certain prison is in the process of being equipped and that’s why no one has a set yet. For the same reason, they deny his family to bring him a TV.

“We cannot grant special advantages to him or any other person. If it is about receiving information, he receives it from newspapers and there have never been problems with bringing newspapers and books inside,” the press office told us.

Members of Parliament Mikheil Machavariani and Giorgi Gabashvili of the UNM ask Speaker of Parliament Usupashvili to let them visit their party secretary.

Machavariani said on Monday’s briefing that the detainee’s property has been seized and that he is victim of political persecution.

“It seems that they didn’t expect that we would stay put even after detaining Merabishvili,” he noted. “Merabishvili as an acting Secretary General demands to have access to information sources.”

Speaker Usupashvili is currently on a visit to Brussels.