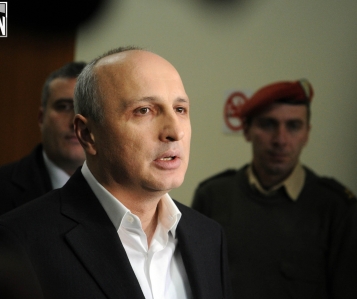 TBILISI, DFWatch–Former Georgian Interior Minister Vano Merabishvili was Thursday sentenced to four years and six months in jail in a case concerning the dispersal of a peaceful anti-government rally on May 26, 2011.

Tbilisi City Court has been reviewing the case for five months. The court sentenced Merabishvili for abuse of powers, but acquitted him for the charges concerning personal humiliation.

Punishment for the first charges was six years, but the mass amnesty law which was adopted in December, 2012, reduced this sentence to four years and six months in jail.

He is also prohibited from holding public office for a year and six months.

Merabishvili’s lawyer Giorgi Chiviashvili told the TV station Rustavi 2 that he and his client will continue the fight and may appeal to the European Court of Human Rights in Strasbourg. He said he doesn’t agree with the sentence even though his client was acquitted on one of the charges.

“Merabishvili was illegally found guilty. There is no factual conditions or evidence. Unfortunately, the court could not resist the harassment,” he said.

His client previously said during a different trial that the judge was being pressured by the government and was unable to make independent decisions.

Meanwhile, five people were detained at Tbilisi City Court during a physical scuffle between supporters and opponents of Merabishvili. People from both sides of the scuffle were detained.

A few weeks ago, Tbilisi City Court set a sentence of five years in jail for Merabishvili in an embezzlement case in connection with an employment program in 2012.

Merabishvili has been in detention since May 2013 facing charges in several cases.

The Prosecutor’s Office charged Merabishvili with giving the order to attack participants at the 2011 rally in front of parliament in Tbilisi, to detain them en masse and threaten them, punish them and have use physical and psychological influence on them. The former minister denied all of the charges.

Another charge concerns the murder of bank employee Sandro Girgvliani in 2006. In that case, Merabishvili is charged with abuse of power, specifically hiding evidence.