Merabishvili claims criticism is the result of pressure

Merabishvili claims criticism is the result of pressure 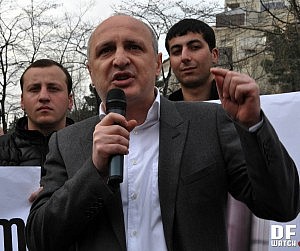 Tbilisi, DFWatch – Former Interior Minister Vano Merabishvili claims that a scathing attack on him by a former colleague was the result of pressure.

Merabsihvili, who was prime minister in the election campaign and is now secretary general of President Saakashvili’s UNM party, Wednesday countered by claiming that Akhalaia had criticized him because he is under pressure and afraid.

“I think that the National Movement is strong and they cannot frighten the majority of our party,” he said.

He added that the latest events are related to the upcoming rally on April 19, when the UNM plans to hold protest rally at the old parliament building in Tbilisi, which he claims the Ivanishvili government ‘is afraid of April 19.’

“They do everything in order to avoid a massive rally on April 19, as the government is really afraid of people.”

The Secretary General of the UNM said his party’s activists are under pressure these days.

On Wednesday, Marika Verulashvili, a member of parliament who left the UNM faction after the parliamentary election and became an independent MP, said that she thinks ‘it is a crime to be together with Vano Merabishvili.’

“The failure of the National Movement in the parliamentary election is because of Merabishvili,” she said at Tbilisi City Court, where she attended the trial of Bacho Akhalaia, former Defense Minister.

Replying to Verulashvili’s comment, Merabishvili claimed that she, too, was only criticizing the UNM because she was pressured to do so.