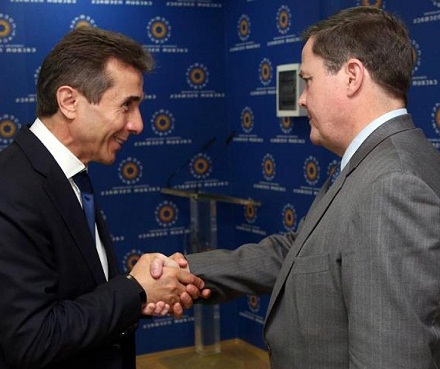 TBILISI, DFWatch – Deputy Assistant Secretary of State Thomas O. Melia and the rest of a government delegation from the United States are in Georgia holding meetings.

The main topic is the parliamentary election on October 1.

The delegation arrived on Sunday. It is headed by Melia and also includes representatives of U.S. International Development Agency, the Department of Defense and Department of Justice.

According to the U.S. embassy in Tbilisi, the visit underlines the importance of a democratic election process in the country, as a result of which the Georgian people should elect a parliament which will express their own will.

The delegation will hold meetings and ask the Georgian government to fairly, unbiased and transparently enforce election legislation regulations. It will also appeal to political parties to actively get involved in this process and defend the law.

The first meeting was with the Christian Democrats, a party which is known for its constructive relationship with the ruling party and deals with the government. Despite this, the party is often strongly critical to the government.

Giorgi Targamadze, leader of Christian Democrats said after the meeting that they discussed the election.

“It’s a bilateral position and common view that more political balance and accountability among political forces is necessary for the country’s democratic development,” he said, adding that visits of guests from US State Department and government will have positive influence on fair election campaign and legal enforcement during period before election.

“We spoke about challenges of modern election campaign, what we expect for results and in regards of working at Georgian parliament after election. These people have been working on Georgia’s issues for years and know well the specifics of Georgian political system.”

Bidzina Ivanishvili, the leader of the largest opposition bloc, also says that Americans know the current situation in Georgia perfectly. He said this statement after meeting with the delegation.

He said that the visit of such a delegation once more underlines that US, Barack Obama and Hillary Clinton are paying attention to the election in Georgia and want it to be conducted in a democratic way.

The delegation continues meetings with the ruling party and representatives of the government. They have already met with Prime Minister Vano Merabishvili. Richard Norland, US new ambassador to Georgia attended the meeting. The topic was US-Georgian relations, the current situation in Georgia, while the prime minister introduced them to the election environment and future plans of the government.