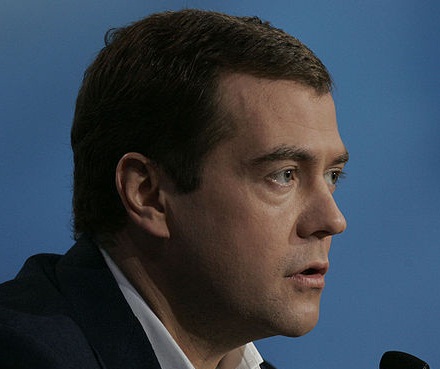 President Dimitry Medvedev wants to restore diplomatic relations with Georgia, but only as long as he doesn't have to talk to a certain individual. (Official Kremlin photo.)

But the president adds, only if he won’t have to shake hands with one person.

That one person is understood to be Georgian president Mikheil Saakashvili.

Diplomatic relations with Russia and Georgia suspended after the war in 2008, when Russia occupied Georgian territories. Russian officials have said a number of times told that the Georgian president is unacceptable for them and refused to communicate with him.

Medvedev made this statement on a meeting with students on January 25.

“We are absolutely ready to restore diplomatic relations with Georgia. We didn’t break them off. There is only one person I don’t want to have business with. You probably know who I am talking about, I won’t meet him and shake his hand,’ Medvedev said.

Regarding other politicians and officials, and the Georgian people, the Russian president claims that he ‘very much wants the estrangement phase to be finished as soon as possible’.

“Several steps have been already taken in this direction. Specifically, flights are restored between the two countries. It’s necessary to ease the contact between people.”

Mr Medvedev added that he now awaits a response from the Georgian government.