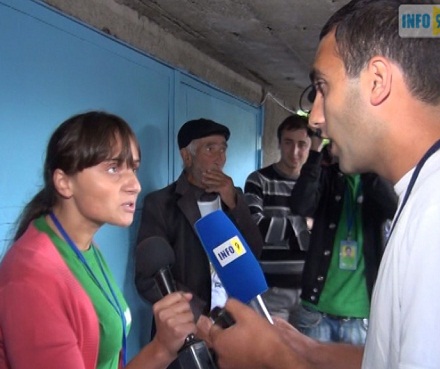 A reporter for info9 (right) is being interrupted by an unknown woman, who among other important queries wanted to know if info9's man knew the deductive method and who Jack London was. (Info9.)

TBILISI, DFWatch – Do you know the deductive method? Who was Jack London? What is Watergate?

These are some of the important questions an unknown woman recently asked a reporter for info9, again and again, apparently in order to keep him from doing his work.

“I want to prove that uneducated journalists work for Bidzina Ivanishvili,” the woman says.

Journalists working for the online television info9, which is affiliated with Ivanishvili’s opposition movement, have become a target for groups of pro-government journalists, who are holding them up for hours under cover of doing interviews.

The stalkers come from Real TV, something called the Media Group and other individuals, and follow info9’s reporters around, interrupting them in their work by persistently asking questions.

It started with info9 journalist Ekaterine Dugladze being followed around by a group of people with cameras for more than a week. Afterwards, others have joined fate with her as reports came in from other regions of similar harassment.

One of the latest reports came from Lagodekhi, in eastern Georgia. The journalist was shooting some footage at one of the clinics President opens almost every month in different regions. An infant is in a serious condition, because the hospital doesn’t have the appropriate equipment, he needs to be transferred to another hospital, but there is no car with incubator to transfer him.

The info9 journalist tries to find out more about the story, when a girl appears who calls herself a freelance journalist. She stands in front of the cameraman and asks questions like who finances info9, why they are interested in making this story and who sent them there. She is accompanied by a cameraman, who films what is happening.

Another recent story is from Lanchkhuti, where this time a journalist from Real TV follows an info9 journalist who is making a report about a family there. The questions are nearly the same – where are you from, who finance you, why do you need to report about those damaged buildings, what do you promise to people and who bribed you.

Rrepresentatives of Real TV have avoided answering questions about these incidents. When it comes to the people calling themselves Media Group, they were identified as journalists from the Imereti regional television station Imervizia. The head of the TV says she is not responsible for what these people do outside of their working hours, as none of their footage made it to be reported in Imervizia, unlike iTV. iTV, pro-government online TV reported footage taken by one of those people calling themselves Media Group. The report was called ‘until death with Bidzina’, and told of how calmly journalists from info9 are working.

Kakha Bekauri, director Channel 9, which belongs to the wife of Bidzina Ivanishvili, recognized police employees among one group of people holding cameras trying to question journalist from Channel 9.

Kakha Bekauri says those were people, who dressed in police uniforms were at the building of Elita Burji Ltd, a company which is affiliated with the Georgian Dream coalition and has been fined by Tbilisi City Court several times. As usual, the Interior Ministry made itself unavailable when journalists called for comments.

Info9 complained to the Public Defender and asked him to intervene about the latest incident. The ombudsman called on all media outlets and journalists to strictly follow professional standards and ethics, to avoid such incidents and actions, which provokes conflicts and raises the danger of confrontation.

Journalists have complained to the prosecutor’s office a number of times, but there was no response. The police has not reacted either, except from one incident which ended in violence.

The case was reported by info9. A cameraman was dealt a blow near the eyelid, when a group from info9 was reporting on a visit by Georgian Dream representatives to the village of Akhlaldaba.

This time, the police intervened and fined the person who attacked the cameraman. Giorgi Karelidze from the village Akhaldaba was fined for petty hooliganism. Gori’s regional court fined him 100 lari, about USD 60.

A journalist was also beaten in the stone throwing incident in Karaleti. One of the participants beat journalist Saba Tsitsikashvili, who was transferred to hospital. He was soon let home. The one who beat him was arrested and sentenced to 15 day administrative detention.

Vasil Dabrundashvili, a journalist from the production company Studio GNS which works on investigative reports, started working to investigate these cases of journalists being chased, and ended up in the same situation himself. This took place in Zestaponi, a town in western Georgia. For three hours he was chased by the people claiming to be from Media Group, who asked him questions and prevented him from doing his work.

He remembers being asked questions like – what do you think of Kakhi Kaladze and his political activism? What do you think about Georgian Dream and how much will you be paid for this report?

Media.ge quotes him saying that the police worked on the report for two hours and later told him that they had called a search for these people’s car, while the car stood parked 50 meters from where they were. A journalist says this was the same group that followed Ekaterine Dugladze around.