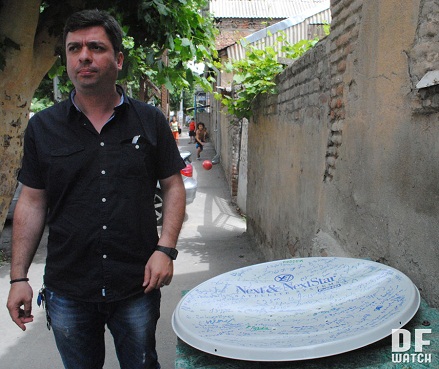 TBILISI, DFWatch – A rally was held Wednesday outside President Mikheil Saakashvili’s residence in protest against the seizure of thousands of satellite dishes which prevents Georgians from seeing government-critical channels.

The president’s residence rejected a symbolic gift – a satellite dish with many signatures on it, protesting what has happened.

“We brought a satellite dish to Mikheil Saakashvili as a gift, so he could install and get the information. The idea belongs to Lasha Tughushi, editor in chief of newspaper Rezonansi. During our previous meeting the supporters of Maestro signed on the dish,” said Ilia Kikabidze, head of Maestro.

The media workers demanded to return to Maestro the satellite dishes which were seizure on June 20.

Lasha Tugushi said that it’s very important for people, especially those living in the regions, to have diverse information.

Media commentator Zviad Koridze added that the government should stop these unfair seizures as soon as possible.

A representative of the president’s residence refused to receive the symbolic gift from media organization’s representatives. She said that it was a bribe, so she could not accept it.

The organizers left the dish at the reception room.

“We are not going to stop. We will continue with rallies until the dishes are given back to maestro,” said Lasha Tughushi.

The next rally will be held in front of the prosecutor’s office on August 3.