Mayor wins right to be reinstated weeks before end of term

Mayor wins right to be reinstated weeks before end of term 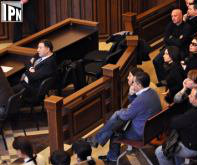 TBILISI, DFWatch–The Georgian Constitutional Court on Friday revoked a decision to suspend Tbilisi Mayor Gigi Ugulava pending a corruption trial, and he now plans to go back to work only weeks before the local election.

Tbilisi City Court suspended Ugulava in December, 2013, until he could face trial for abuse of power and embezzlement of money belonging to Tbilisi City Hall. Ugulava appealed the decision, which was made at a closed hearing.

He won in Tbilisi City Court, the Appeals Court and now the Constitutional Court. His supporters applauded as the decision was read in the courtroom.

After leaving the Constitutional Court, Ugulava said he will ask Tbilisi City Court to restore him as mayor. He said that although it is only two weeks until the end of his term, it’s a matter of principle.

On June 15, Georgia will elect new mayors and gamgebelis, and this will end the bad practice which the government and prosecutor have used against him, he said.

Justice Minister Thea Tsulukiani said Friday evening on Maestro TV that the thought of Ugulava being restored as mayor for ten days makes her smile. She said she isn’t familiar with the details of the court’s decision but hopes it was justified well.

“But I don’t think that it should be a cause of concern, because Ugulava is not Napoleon and there are not a hundred days until the election,” she said, adding that there are more serious issues right now in the country.