‘Mastermind of Istanbul attack was an agent for Saakashvili’

‘Mastermind of Istanbul attack was an agent for Saakashvili’ 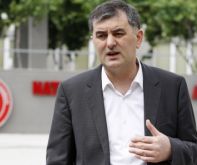 TBILISI, DFWatch–Two leading politicians in Georgia believe that Akhmed Chatayev, the suspected mastermind of the terrorist attack at Istanbul’s Ataturk Airport, was an ‘agent of the previous government.’

“It turns out that this prominent terrorist [Chatayev] was an agent of Saakashvili, who was financed by Saakashvili and who used to change his passports,” Minister of Refugees Sozar Subari said.

He added that when Saakashvili comes back to Georgia he will have to answer questions about how he financed and cooperated with the terrorists.

Addressing the question of why Chatayev was released, the former ombudsman and prison minister said there was only one charge against him and there wasn’t any evidence. Investigators weren’t given any other option but to release him, he said.

Irakli Sesiashvili, who heads the defense and security committee in parliament, said Saturday on Rustavi 2 that Chatayev used to be a security agent of the former government and used to take operative orders from the authorities.

“He used to have a passport as Georgian citizen and acted in different countries on orders of our intelligence. Saakashvili has to pray that Chatayev wasn’t involved in this attack,” Sesiashvili remarked. “We have to find out what kind of orders Saakashvili used to give him.”

Later in the same interview, Sesiashvili corrected himself and said that Chatayev has not been a Georgian citizen.

“Yes, he hasn’t been a citizen of Georgia, despite even though I told you that he was an agent,” he explained.

“Our Prosecutor’s Office summoned him for numerous questionings, but it seems he remains loyal to Saakashvili and Lortkipanidze and he didn’t cooperate with the investigation.”

The National Movement considers the accusations ‘absurd’ and criticizes the government for releasing Chatayev from prison.

Chatayev is reported to be the organizer of the terror attack at Ataturk Airport in Istanbul on June 28, but this has not been officially confirmed by Ankara.