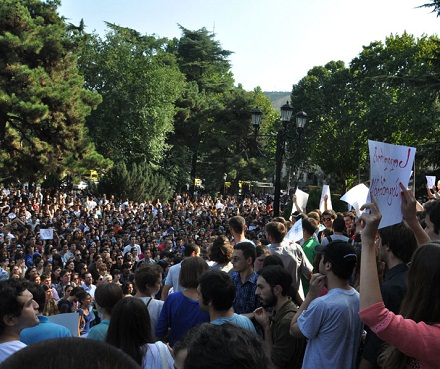 TBILISI, DFWatch – A series of protest rallies have erupted throughout the capital and large cities in Georgia, after shocking videos of prisoner abuse released by the interior ministry and aired on two opposition TV channels last night.

Some of the footage appeared to be made as late as a month ago, while other clips were from 2011, apparently refuting a claim by the government that they were staged by prison guards that had been paid to act in the films.

The material seems to confirm what human rights groups and opposition activists have been saying for years, that detainees are sometimes sexually humiliated through rape and sodomy, and beatings are almost routine.

Until the videos surfaced, the government has simply refused to comment whenever these allegations have been brought up. The prison minister, Khatune Kalmakhelidze, once told a reporter from Maestro TV that she thought she was unfairly treated because the TV channel reported on prisoner abuse, which she categorically denied was taking place.

After the footage was aired on two opposition channels, officials expressed disgust and the prison minister said she would resign.

But people did not seem to be content with the government’s explanations, and continued to gather at different places in Tbilisi.

The first protests started late at night yesterday after the first airing of t he footage. Relatives and parents gathered at Gldani prison, where most of the prisoner abuse seen in the videos took place. Another event was planned on social networks for 12:00 am. People gathered at Tbilisi Concert Hall, where President Mikheil Saakashvili was attending a concert. The rally lasted until early morning.

Today protests continued both places at 12:00 pm. Participants blocked Melikishvili Avenue, the main street passing by Tbilisi Concert Hall. They started moving towards the government building close to Freedom Square demanding that the government punish the guilty and properly investigate the case.

Another protest started at Tbilisi State University at 15:00. Thousands of people gathered. A rally was planned two days earlier to protest political firings of lecturers and a malfunctioning database system at the university, and organizers decided to express their protest to both these issues and started a rally outside the university.

Representatives of the student council, who are often blamed for beating students who criticize the university system, joined today’s protest against the violence in prisons. They refused to join a student protest a few days ago when people protested against a bad database system at the university.

Lecturers and other students from other universities also joined the rally. Participants plan to move their protest to outside the Public Broadcaster, a TV channel which yesterday completely ignored the whole story about prisoner abuse.

Drivers of minibuses chose another way of protesting. Netgazeti.ge reports that the majority of the drivers tore off National Movement commercials from the outside of their cars, as a sign of protest.

The drivers say people damaged the posters on their cars after seeing yesterday’s footage, so they decided to tear them off completely.