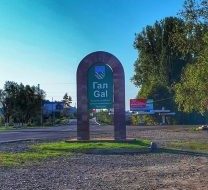 GALI, DFWatch–Young people are leaving their homes here in Gali, Abkhazia, to seek work opportunities abroad. In the last month, about 50 young people, most of them men, have left for Poland from one of the villages in the district, DFWatch was told by locals.

“Work here [in Poland] is like slavery, but we have no other option. On the other side of Enguri, I can not find a normal pay with my profession and disastrous harvest on this year urge me to find livelihood abroad,” a young pharmacist from Tagiloni village, who left behind his family and now lives in Poland, told DFWatch.

“The main problem is the lack of an apartment. I asked the government several times to give my family a place to live, but they always refused,” he said, referring to a  special program by the Georgian government which includes providing free living space to IDPs.

“Moreover,” he said in a conversation recorded by Skype. “Once I crossed the Enguri [administrative borderline] and they annulled my IDP card. This is our government. Thus I had to emigrate to Poland. In principle, conditions here are almost like slavery, but the pay is relatively decent for sustaining my family,” he said with a visible discontent towards the Georgian government.

Another young man who also left for Poland says he had to leave behind his seven months old baby.

“I used to work at construction sites in Tbilisi, but there the pay was so little, I couldn’t feed my family,” he said. “Here, in Abkhazia, one can find the same job in Pitsunda or Sokhumi but often the employers deceive workers and after construction is completed, don’t pay. So I had to leave.”

The third person we interviewed had a similar story. He also criticizes the Georgian government for negligence and says what’s most bitter is that he can’t communicate properly with his wife and two kids who live at his parents’ home in Gali.

“I don’t know how long I can last here. The older son knows me from photos, the youngest doesn’t know who I am at all,” he said.

The fourth person we talked to says that a disastrous harvest of hazelnuts, which is their main produce to sustain themselves, has rendered the economic situation for Gali residents effectively unbearable.

“Now the harvest is destroyed,” he said. “What should the 18-19 year old boy do in the village all day? The main part hangs around drinking or smoking [weed]. There is almost total unemployment and the only possibility is to flee abroad, and if you are lucky enough to find a decent job, you can sustain yourself and also support you family.”