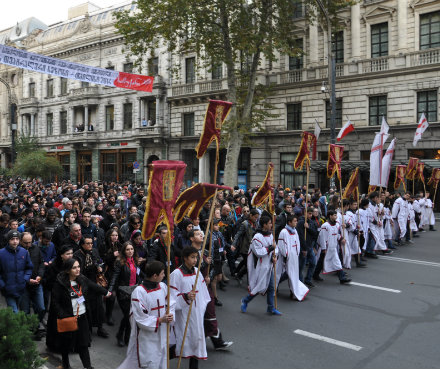 TBILISI, DFWatch–Georgia’s Orthodox Church on Thursday remembered the 100,000 martyrs by walking through the streets of Tbilisi for hours and conducting a prayer on Metekhi Bridge.

The church marks this day the same way every year. According to historical sources, a hundred thousand people were killed for not renouncing Christianity in 1226. The mass executions were ordered by Sultan Jalal ad-Din during the capture of Tbilisi.

Jalal ad-Din, the last ruler of the Khwarazmian Empire, ordered that as a sign of renouncing Christianity, Tbilisians should be forced onto Metekhi bridge and asked to insult icons of Jesus. If they refused, they would be beheaded. Thousands of people didn’t comply.

November 13 is the commemoration of day of these martyrs.

On Thursday, thousands of people went through the streets with clerics bringing religious flags, icons and candles. The procession started at 15:00 and lasted two hours.

At 17:00, Patriarch Ilia II conducts a traditional prayer on Metekhi Bridge after which doves are let into the sky.