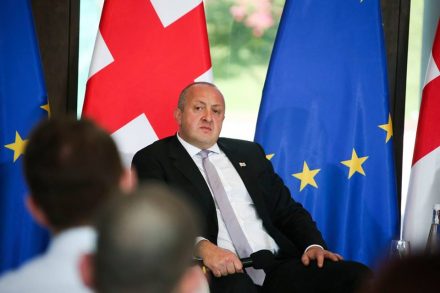 President Giorgi Margvelashvili has announced his decision not to run for the presidential seat in the fall and slammed Georgia’s ruling party for attempts to ‘discredit’ him.

“I do not plan to take part in this election, but in other way I will continue to serve your country,” said Giorgi Margvelashvili on Friday, during a meeting with university students, which he held together with Valdis Zalters, former president of Latvia.

He criticized leaders of Georgian Dream, his former allies, whom he split soon after his election in 2013.

“Believe me, there are very few countries [around the globe] where the entire political elite confronts one person and all resources are used to discredit him,” Margvelashvili said.

He also expressed his gratitude to his supporters and the family, which “has undergone very tough times during these five years period and has not created a single problem or discomfort for me.”

Giorgi Margvelashvili was elected in 2013, supported by Georgian Dream and its leader, billionaire Bidzina Ivanishvili. However, soon after election the relationship soured, which has led to a full-fledged conflict with the ruling party and particularly Mr. Ivanishvili, his former close ally.