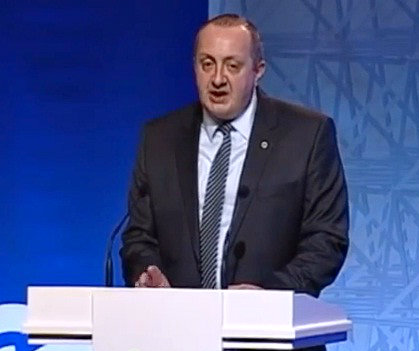 TBILISI, DFWatch–In his less than two minutes long address at the Eastern Partnership Vilnius Summit President Giorgi Margvelashvili spoke briefly about the country’s past, present and future on the way to Euro-Atlantic integration.

After recalling the democratic election in Georgia and speaking about the Association Agreement, which went through a first signing on Friday, the president mentioned the EU-Russia dialogue.

“We also welcome the EU’s dialogue with Russia explaining that the Eastern Partnership is not a policy directed against Russia but a win-win solution that will increase economic prosperity, security and stability in our region and will also benefit Russia,” he said.

He continued saying that Georgia is looking forward of support from EU to reduce the threats from Russia seen along the border these days.

“[…] to respond in a coordinated way to any substantial pressure exerted by Russia in an attempt to divert us from our goal of signing the Association Agreement and DCFTA in 2014.”

Russian soldiers are continuing to install barbed wire and fences at the villages which border on the breakaway regions and recently started putting up signs to warn people against crossing the so-called border. Georgian villagers are often detained by Russian soldiers and accused of violating the border and sent to Tskhinvali where they are placed in detention isolators.